Creationists will work so hard to avoid the truth

Stanford Staab has a blog and a post that became a newspaper editorial.

It is stupid from start to finish but I restrained myself and looked at one specific claim he made:

But when you get down to it, the evolutionists have to admit that the only real reason why they must support the idea is because the thought of an intelligent creator is simply unacceptable.

Why is this unacceptable?  I would have to say it is due to the fear of guilt one would face if one were to admit to a creator and a moral authority.

I comment on his blog post, noting that more than 15,000 American Christian clergy disagree with him. If nothing else, for them "the thought of an intelligent creator is simply" not "unacceptable".

Posted by Surprises Aplenty at 11:53 No comments:

"Only a theory" ongoing roundup

This is a developing post I intend to keep adding examples to.
The first come from Jonnie Hutchison, Green Plain church of Christ in the Murray Ledger. He writes:


The very definition of a theory suggests that which is speculative and conjectural. If there is sufficient evidence to prove a theory, then it ceases to be a theory. Some have theorized that earth is being visited by aliens from another planet. Yet, merely advancing such a theory does not make it a fact no matter how many people may believe it. Such is the case with the theory of organic evolution. Where is the evidence that takes it from the realm of theory to fact?

------------
Again, I will be adding more examples of people using, "Only a theory" as an attack on evolution. Here is the rebuttal.
From Wikipedia:


A scientific theory is an explanation of an aspect of the natural world that can be repeatedly tested, in accordance with the scientific method, using a predefined protocol of observation and experiment.[1][2] Established scientific theories have withstood rigorous scrutiny and embody scientific knowledge.[3]
The definition of a scientific theory (often contracted to "theory" for the sake of brevity) as used in the disciplines of science is significantly different from the common vernacular usage of the word "theory".[4][Note 1] In everyday speech, "theory" can imply that something is an unsubstantiated and speculative guess,[4] the opposite of its meaning in science. These different usages are comparable to the opposing usages of "prediction" in science versus everyday speech, where it denotes a mere hope.


Outside of science, the definition of a theory is a thought that may or may not be true. In the science community, a scientific theory is defined as a hypothesis or a group of hypotheses about some phenomena that have been supported through research using the scientific method.


"Hypotheses, theories and laws are rather like apples, oranges and kumquats: one cannot grow into another, no matter how much fertilizer and water are offered," according to the University of California. A hypothesis is a limited explanation of a phenomenon; a scientific theory is an in-depth explanation of the observed phenomenon. A law is a statement about an observed phenomenon or a unifying concept, according to Kennesaw State University.


So a theory is a hypothesis or even simple idea that has survived repeated testing. Further, it is an explanation for events, not the event itself. There are a group of theories for evolution including natural selection, sexual selection, founder effect and more. These are explanations for the factual events and things we see. In contrast, there are laws regarding gravity and we all see the fact of it, but there is no well-accepted theory. So the phenomenon is seen and known, but the mechanisms are not understood. 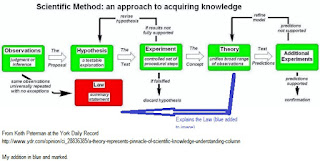 -------
More examples of Creationists using, "Only a theory" as an attack on evolution.

A twitter search for "Only a theory". Some tweets use it sarcastically or in explanation, but many Tweeters think this is a valid attack on evolution. 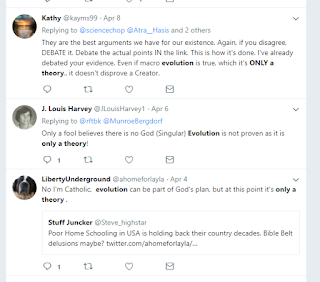 kjhg
Posted by Surprises Aplenty at 07:11 No comments:

Email ThisBlogThis!Share to TwitterShare to FacebookShare to Pinterest
Labels: only a theory

Creationists often finish this sentence with, "....therefore God did it" which is not a good use of logic. The proper formulation naturally is, "Science can't explain it, therefore we don't know how it happened." "We don't know" obviously does not equal "God". Well, this is obvious to anyone who thinks about it for a moment.

ICR did not think about it in posting this article about new research into the formation of the Earth's Core.

Obviously this is a form of the God of the Gaps argument. "We don't know how this one thing happened, therefore God did it." And the problem with that argument is that God's reach is ever shortening.  We didn't know how traits were inherited; now we do. We couldn't picture a halfway point between fish and amphibians; now we have examples of what that creature would look like.

---
Some more examples:
Bill O'reilly telling us (Youtube link, specific quote at 1:45),
"Tide goes in, tide goes out. Never a miscommunication. You! can't explain that."
Nevermind that we can indeed explain it (gravity has been well-understood for a few centuries), if we couldn't, that wouldn't mean god had a hand it in the process.
---
Mike Finneran on Quora says,

And since abiogenesis cannot account for the origin of life, you are stuck with a creator God. A God that made mankind in his image and likeness.

Note to Mike; we really aren't stuck with that.

More to come...
Posted by Surprises Aplenty at 08:44 No comments:

Email ThisBlogThis!Share to TwitterShare to FacebookShare to Pinterest
Labels: God of the Gaps

Well, it depends on what scientific fields we are talking about. Of course on this blog I discuss evolution and also some aspects of physics, but also medicine.

I feel I must immediately add another caveat. This time at least, I am not talking about JWs and their deadly 'no blood transfusions' policy.

No, I'm today offering a link describing the anti-science views of the Southern Baptist Theological Society.


It involves our old friends at Southern Baptist Theological Seminary, where a long-time professor of pastoral care has just been pushed out following harsh criticism by one of his fellow professors — a “biblical counseling” advocate named Heath Lambert. All but one of the phrases in quotation marks above are things that Lambert has actually said about psychology, which he rejects completely.
The other quotation is from his boss, Southern Seminary’s president, Al Mohler, who shares Lambert’s claim that anything beyond Bible-only counseling involves a rejection of “the wisdom that can come only from God and God’s word.”

No one tried to twist our reliance on medical doctors into an accusation that we lacked faith in the sufficiency of such “biblical therapy,” telling us that “In this therapeutic age, it is really important that we think as Christians … that we employ authentically Christian thinking, biblical thinking, to human life, and that we do this in a way that, without apology, confronts and critiques the wisdom of the age and seeks the wisdom that can come only from God and God’s word.”

The blog post author, Fred Clark, was describing the difference in opinions over treatment for tennis elbow and psychiatric care. To add the obvious snark, mental problems are obviously demons and should only be treated with Bible.
Posted by Surprises Aplenty at 08:32 No comments:

As Take That Darwin notes, this man chose hat. 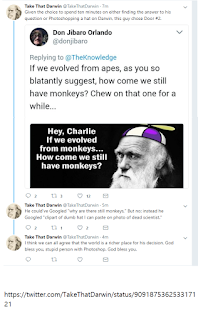 Posted by Surprises Aplenty at 08:04 No comments:

Email ThisBlogThis!Share to TwitterShare to FacebookShare to Pinterest
Labels: creationism, Darwin, evolution, misconceptions, why are there still apes

Man, the lengths creationists, and ID is a form of creationism, will go to hide and protect their unsupported claims.
Posted by Surprises Aplenty at 20:30 No comments:

Fine tuning,
the constant, unchanging laws of physics
and the Christian Creationists who don't understand what those words mean.
PZ Myers looked recently at a Tweet by AiG's Ken Ham that was quoted in a Kentucky newspaper.

Reporting on Ken Ham's tweet about hurricanes.
"Devastating Hurricanes-reminder we live in a fallen groaning world as a result of our sin against a Holy God-it's our fault not God's fault"


So the clear problem is, as described in Myer's response (the first link); "What causes hurricanes? If you asked me that question, I’d mumble something about rising water vapor in equatorial waters condensing and releasing latent heat, pumping energy into the air. A hurricane starts as hot, moist air rising into the atmosphere."

The physics of weather is well-understood. It sure looks like Ham is saying that before Eve bit the apple, the physics of the world was entirely different.

Ham, and other creationists, make a similar claim in saying that rainbows did not exist before Noah's Ark. So before these events, temperature related changes between liquid phase and gas phase did not occur? Winds were not generated by temperature changes in oceans? And gases in our atmosphere did not reflect and refract light the way they do now?

I'll finish with a pair of comments from the Myer's blog post:

Posted by Surprises Aplenty at 11:06 No comments: