Evidence for evolution, an overview

There is no proving in science. Below I am offering evidence or support for evolution.  No single point 'proves' the theory of evolution but they all support it.  At the end of this essay, I will offer an explanation for gaps in the evidence.

Linnaeus was not an evolution proponent, having died eighty years before Darwin publicized his theory.  But his classification system offers great support for the theory of evolution and a universal common ancestor. A designer who made every species as one-offs, with no required connection to each other would not have included such similarities. Sure, in the smaller classification levels - Genus or maybe Family - two animals that live in similar ways can be expected to look similar.  This explanation falls apart at the higher levels,though.  Fish and cephalopods both live in the ocean, at a wide variety of depths. They are both cold-blooded although their bloods are very different.  Of interest here, we mammals, and all vertebrates all share the same kind of eye as fish while squid, which live in the same conditions as fish, have a different architecture for their eyes.
Some creationists want to see "Croco-ducks" or "Fronkeys" (frog-monkeys).  It is possible that a creator could have made such things but they would destroy the theory of evolution because attributes specific to different classifications would be mixed.

Recent additions and descriptions of the Tree of Life


"The tree of life is one of the most important organizing principles in biology," said Jill Banfield, a UC Berkeley professor of earth and planetary science and environmental science, policy and management. "The new depiction will be of use not only to biologists who study microbial ecology, but also biochemists searching for novel genes and researchers studying evolution and earth history."

As the Sensuous Curmudgeon says,


But we can’t help wondering what people like ol’ Hambo [Ken Ham of AiG] make of this. Did all those species somehow appear in the 4,000 years since Noah’s Flood? Why does every species — including our own — fit into its proper place in this one hierarchy — as if they were all related? Why aren’t there any unique outliers that don’t fit anywhere?

The Daily Mail has a great slideshow. After finding the best images I could, I have -as usual- shrank them a little.  If you want to see them full size, follow the link. 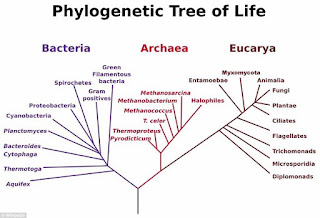 In the image above, you can see Animalia, which includes us, at the top right-hand side.  Note the whole tree above is the small, narrow set of branches on the bottom of the image below.  Animalia is not a large part of life's diversity - it includes us but it not therefore a prominent group. 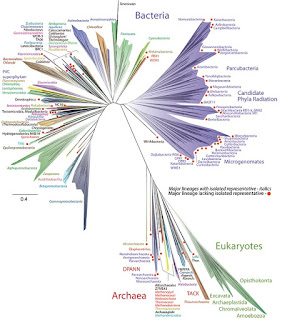 Fossils offer two forms of support for evolution. First, various groups of fossils are always linked and found together and these groups always exclude other fossils.  Humans are never found with dinosaurs and rabbits are never found in the Cambrian.
Second, transitional fossils are only snapshots in time and have limited value, but they do show that a transition from fish to amphibian is at least possible.  When a creationist claims there is no way  fish could evolve into land animals "How would it walk? How would it breathe? It's impossible!" these transitions -and there are a great set of seven transitions from fish to amphibian - show it is at least possible.  They don't prove a universal ancestor but they do show it is possible.
---
Bio-geography: As Pope John Paul II wrote, "The convergence, neither sought nor fabricated, of the results of work that was conducted independently is in itself a significant argument in favour of this theory."  The very distribution of animals on the Earth supports the Theory of evolution.  This is a convergence of age of the Earth, plate tectonics and evolution.  This support also specifcally argues against the view some creationists hold of a Global Flood and resettlement of the Earth originating from the Middle East or Turkey.
---

Vestigial organs
"Charles Darwin was familiar with the concept of vestigial structures, though the term for them did not yet exist. He listed a number of them in The Descent of Man, including the muscles of the ear, wisdom teeth, the appendix, the tail bone, body hair, and the semilunar fold in the corner of the eye. Darwin also noted, in On the Origin of Species, that a vestigial structure could be useless for its primary function, but still retain secondary anatomical roles: "An organ serving for two purposes, may become rudimentary or utterly aborted for one, even the more important purpose, and remain perfectly efficient for the other.... [A]n organ may become rudimentary for its proper purpose, and be used for a distinct object."[8]"

Cave Fish are a great example - some are blind and appear to have no eyes, but in fact have eyes that are overgrown by flesh and skin.  This would seem to show they are a new species that originated from one that had functioning eyes.  It would be hugely difficult to suggest that the Designer accidentally included them in building this specific animal.  Again, this does not 'prove' there was no Designer or 'prove' evolution true, but evolution and the generation of new species has to be seen as the most reasonable explanation.

From AiG:
"The Definition of Vestigial Organs Has Been Changed
As the list of “functionless” organs has grown smaller and smaller with advancing knowledge, the definition of vestigial organs has been modified to include those whose functions are claimed to have “changed” to serve different functions. But such a definition removes the burden of proof that vestigial organs are a vestige of evolution. Thus, the evolutionist might concede that the human coccyx (“tail bone”) does indeed serve an important function in anchoring the pelvic diaphragm—but still insist, without evidence, that it was once used by our ancestors as a tail."
This has to be seen as dishonest as Darwin himself stated that secondary functions are possible.  If the originator of the theory specified this in his definition, it cannot be said to have changed.
---

I have not dug into the arguments whether chimps and humans share 98% of our DNA.  Creationists seem to suggest that all English books use a lot of 'e's so stating that two separate books both have more 'e's than any other letter is silly. I would agree with this simple statement but I don't think geneticists use such a simple argument.  I haven't bothered to look.
However, we do share inserted viral DNA in ways that best support a common ancestor.  Also, we have 23 pairs of chromosomes and chimps have 24.  The thing is, we have a chromosome pair that shows two pairs got stuck together in historic times.  This does not mean that we share an ancestor with chimps, but offers support.
---

Gaps in the evidence

Why are we lacking in evidence?
Fossils: There were 5 billion passenger pigeons alive at one time.  We have zero fossils of them.  There are a few hundred thousand chimpanzees alive now and probably more in times past.  We have fossils of fewer than ten individuals.  There are places near the border between Eastern Canada and the US where the tides are phenomenally fast.  Paleontologists go out at low tide and try to recover some fossils, working quickly because they know the next cycle of tide will wear them away to nothing -and display new ones.
As chimps and passenger pigeons show, few animals actually fossilize.  As the tidal rocks show, many fossils are destroyed before they are ever seen.
With organic chemicals, the traces or fossils are even less enduring.  We don't know how a bacterial flagellum evolved and don't know what every individual step would have looked like but we do have a halfway point.
---
More than enough evidence points to the Theory of Evolution and none contradicts it.

Posted by Surprises Aplenty at 10:51

Email ThisBlogThis!Share to TwitterShare to FacebookShare to Pinterest
Labels: evidence