Via the Sensuous Curmudgeon, I learned that AiG has worked to clarify its position on kinds. To be maximally sympathetic to creationists, lots of mainstream classification terms are ambiguous or difficult to rigorously pin down. Are lions and tigers two different species? Dogs, wolves and coyotes comprise one, two or three species?  When we look at modern extant animals, it is pretty easy to see different orders or classes. Mammals are clearly different from birds.  Songbirds are clearly not raptors. Rabbits are ....not all the clearly different from rodents ? It's definitely messy.

The YEC term, 'kind', is even messier. Humans are the only member of our kind. Some creationists limit 'kind' to mean species, or very nearly that and almost never reaching the level of genus.  AiG accepts 'family' as kind. They accept all felines -house cats to sabre tooth tigers and all in between - as one kind.

This is probably a good time for a refresher on Linnaeus's classification chart. Image from desire to learn (and shrunk slightly. To see it full size, follow the link): 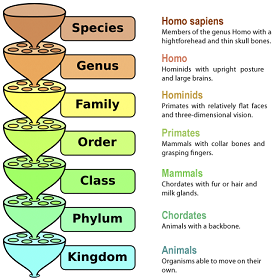 Now let's dig into Dr Boyd's article: Bird Speciation from the Flood to the present.


In Genesis 6:1–20 we read that Noah was commanded to take two of every animal kind into the Ark. Verse 20 makes clear that those animals would include two of every kind of bird. Later, God clarified that seven individuals of the clean animals, including some birds, would be on the Ark (Genesis 7:2–3). Does that mean that Noah had two (or seven) of all 10,380 extant bird species (more if you count extinct species)? If a biblical kind and a species were equivalent, then yes. But they are not the same; many species are categorized under each biblical kind.

Already we run into trouble. He does introduce the concept Kind is Bigger than Species, but he apparently misquotes the Bible. Hmmm. A bit of Googling tells me this is a messy translation problem.  Some translations specify seven pairs, others just seven but add "male and his female". It isn't relevant to this discussion but God didn't say seven individuals of clean animals, but seven pairs. Boyd links to NKJV which states, "You shall take with you seven each of every dclean animal, a male and his female" which is terrible math.  My partial apologies to Dr Boyd; some copies of the Bible agree with his quote.

I often claim that Creationists try to use big sweeping statements to hide local flaws so I am grateful for his attempt to narrow things down.

Boyd graciously links to an article detailing the current evolutionary position, that birds evolved and radiated from South America.  The full text of this article available online. I might discuss it in a later post.


Scientists who accept the biblical account of creation and the worldwide Flood compile evidence from Scripture, genetics, the fossil record, hybridization data, and morphological characteristics to suggest that God created many kinds of birds that began radiating and diversifying over the world after the worldwide Flood destroyed the earth about 4,500 years ago. These birds included both flying and non-flying birds. The two answers given by evolutionary scientists and creation scientists are so far apart from one another that it seems almost impossible to think that they are looking at the same data.

I continue to admire his clarity and respect for the evolutionary position.


A scientist with a materialistic worldview has to account for the first bird; it would have to be the ancestor of all birds. Models of speciation and radiation for events like that would need millions of years.

A scientist with a biblical worldview has to account for the different species of birds found today in each created bird kind from the Flood to the present. Models of speciation and radiation for those events would only need thousands of years.

Boyd links to  AiG's Dr Jean Lightner's study on avian kinds.  I plan to read it but have not yet.(I have now read it and the article consists only of conclusions- "There are the 196 kinds" without much detail)  Boyd describes Lightner's work as suggesting just under two hundred kinds leading to the current 10,000+ species of bird. Such a number could be reached, he works out, if each of the two hundred original species doubled every 750 years and this happened six times (200-400-800-1600-3200-6400-12800).  He then points out an obvious problem. There are only four species of Anhinga but 1,470 species of what he calls "sparrow/finch" kind (or Passeroidea). Clearly, there are challenges even with his suggested rate of new species every 750 years. Also, 750 X six is forty-five hundred years, which I think is a little long for him. (Huh. This link to AiG says that the Flood occurred around that time, giving an estimate of about 4400 years ago.)

He discusses the problems with the term 'species' and we agree.


Robins produce more robins. Bluebirds produce bluebirds. Could a male robin and a female bluebird produce a hybrid like a bluebin? No, they are different biological species. Some birds like the mallard duck and the American black duck are considered different species, but they can mate and produce offspring (unoriginally, they are called the mallard X American black duck hybrid). Does that mean that they are just one species and not two? Not really (though it does depend on who you ask), because the hybrid duck is rare, and most often a mallard mates with a mallard to get more mallards. (When a bird watcher sees a hybrid, he might get either a little too excited or just confused because what he sees does not quite match any pictures in his bird guide.)

He uses bluebirds as an example and finishes with:


However, the ranges of these two species of bluebirds overlap only in a narrow band from West Texas northward—the hybrid zone. Most eastern bluebirds would never even come in contact with a western bluebird because their habitats don’t overlap very much. Because they are from the same bird kind and are obviously very similar (in both appearance and genetics) we can see that they are in the final stages of speciation. Most people believe that they are different enough to call them two separate species. If we include the western bluebird, which also can hybridize with these two species,10 it means that one species is in the final process of a triplet speciation event.

The introduction is over and now we get into the problem  (I've decided to add bolding as I go):


To some people, what I just described sounds too much like evolution. The evolutionary process definitely includes the idea of speciation, but the formation of species in response to geographic (or habitat) differences is consistent with a biblical worldview. Having over 10,000 different species of birds (not to mention mammals, reptiles, and amphibians), especially two of every kind and seven of the clean animals (many of the birds), would have been too much for Noah and his family to care for—not to mention house. The efforts of those involved with the Ark Encounter are providing us with realistic figures about the number of animals on the Ark. Having two of every bird kind and seven of every clean bird kind fits nicely.11

I would suggest, he add "as well as the evolutionary view" to my bolded part.
I note he leaves out dinosaurs from his list. A quick Googling doesn't offer a good (and simple enough for my purposes) list of orders or families for dinosaurs but there were a lot of them.
His solution:


When the birds were released from the Ark, they faced a new environment with quickly developing habitats. Birds could migrate quickly from the location of the Ark in all directions. As they were faced with different environments, their inbuilt genetic variability allowed them to diversify and adapt to these environments, forming different populations of the same bird kind.

I don't know if he solves this problem later in his article, but he is currently leaving out the problems with kiwis here. They are small, flightless birds that currently survive only because they live on an island that historically didn't have predatory mammals on it.  As an evolution proponent I accept that a bird flew to New Zealand millions of years ago and evolved into the kiwi, but that sure looks like a big change of Biblical kind to me.  This simple discussion of kiwi evolution didn't clear things up for me.  Anyway, we are also looking at penguins.  They and ratites like the ostrich and the before mentioned kiwis, only live in the southern hemisphere. This is hard to explain if the original members of the kind began in the northern hemisphere.

The end came suddenly.  Here is an excerpt from the final paragraph:


Evolutionary scientists argue for one ancestor to all flying birds—a descendant of the dinosaurs (that means if you are consistent with the evolutionary worldview, by the way, that birds are reptiles). Creation scientists argue for many different bird kinds that could fly from their creation on Day Four, as Genesis 1 clearly describes.

It sure appears that he ran away from the Passeroidea problem. If we look at a single species of the passeroidea kind and double it until we get to around 1400 species, we need 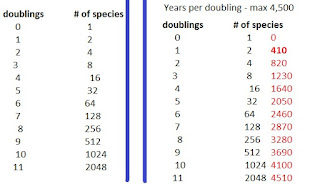 Boyd offered 750 years, as an average but seems to have pointed out that some kinds would need to evolve faster.  The problem is, we've seen most or all of these birds and known of them for four hundred plus years.  The biggest problem with AiG's conception of micro-evolution is the outlandishly high speed they need. This means that when creationists ask, "Why don't we see evolution happening today?" they are sabotaging their own position. To defend their point here, they paradoxically need to show new species of birds that have evolved and appeared since the 1600s.
Posted by Surprises Aplenty at 10:39