Do you see a neck on this Tiktaalik fossil? Image from 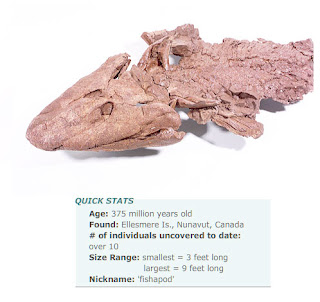 Do you see arms and paws or hands? 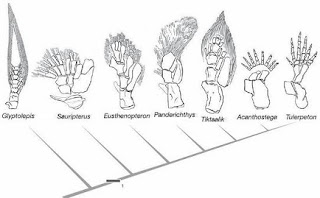 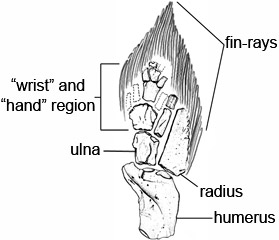 Do these artist's renderings really show the details of the fossil? Or are they merely what the paleontologist and artist want to be there?


Under the title “Dinosaur Hoax,” this unnamed young debunker of evolution triumphantly proves in a three-minute video that so-called dinosaur fossils are no more significant than random pieces of smashed-up plaster. You can spackle the bits back together any way you choose, she says; therefore, dinosaurs are a fabrication.

This woman almost has a point. The following images are from Georgia Life Traces. and have been shrunk (but will be somewhat larger if you click on them). Follow the link to see them full size. The first image is captioned, "A rare piece of dinosaur bone that actually looks like a bone..." while the next one is, "You probably spotted the big chunk right away, but how about the smaller ones that tend to blend in with the non-dinosaur-bone rocks around them?" and the third one is of  a negative cast of a dinosaur track. For this latter, I can kind of see it, if I squint right.

How much of paleontology is based on faith? How much, as the speaker on the video asks, is based on the millions of dollars the paleontologists receive*?

I visited Drumheller, Alberta (link to their museum) almost twenty years ago. A paleontology/tourism group was offering to take people into the hills to look for dinosaur fossils. I joined them, had a great time but found  nothing in the ground. We did pass a huge claw that the guide told us was aT-rex foot-claw fossil. The mineral that had replaced the bone was iron and the guide told us such fossils were so delicate that there was no point in carrying it away - it would crumble at the touch. This is nearly the sum total of my personal experience with fossils. Wait. I also have spent time at Craig Leith Provincial Park. There are many fossils from 400+ million years ago there.

So I am certain that fossils are real, which puts me ahead of the woman in the video.

But are those tiny details correct?

After several fruitless minutes, I have given up on trying to find a long video of a glass-walled beehive. I wanted to demonstrate the 'expert's eye'. At university I was required to spend something like ten hours studying such a bee hive. For the first half hour I only saw a squirming mess. In the second half hour I saw one waggle dance (the dance bees use to communicate where a pollen source is). In the second hour, I saw ten waggle dances and in the following hours I saw them every time I looked. We upper year students would sometimes call a freshman student over and ask them to point out a waggle dance. They saw none. Then we would point out the dances one after another that they had missed entirely.

In my home district of Muskoka, there are many beautiful lakes and it is the perfect distance from Toronto so many wealthy families from Toronto and points south have cottages there. I grew up on those lakes and for many summers as a high school and university student, I worked as a carpenter's assistant on the lakes. I remember being out one summer day with another university student, this one from a drier part of Ontario. He asked me about a recurring whine or high pitched hum we heard through the day. Without needing to think about it, I told him that was the hydraulics of a boat's Inboard/Outboard motor adjusting the trim. This was natural and obvious to me and completely new to him.

I do take the pronouncements of paleontologists on faith to an extent. I have difficulty seeing the various bones described in Tiktaalik's neck and fin. And yet, the people who criticize their claims usually haven't spent time with that specific fossil nor can claim to have spent enough time studying fossils in general to have an 'expert's eye'.
A good example of this is mathematician Fred Hoyle's description of archaeopteryx as a fake. He had no background in paleontology and appears to have misidentified modelling rubber as a suspicious chemical that pointed to fraud. The best counter argument for his claim is that at this time, a total of nine archaeopteryx fossils have been found, some with even better feather impressions than the one he examined. There is more at the link.

---
* The question of whether the speaker on the video is sincere or satirical is still open. If anyone cares, paleontologists do not make millions of dollars, ever.
Posted by Surprises Aplenty at 03:30