These people don't know what the word 'evolution' means. I will add to this post but I wanted to share the examples I have collected so far.

No
Evolution is adaptation within a species, not change from one kind to another ie fish to a bird@ZachTastic24
— John Yuma (@John_Yuma) February 15, 2017 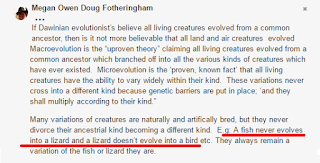 and from the same argument, in photo form rather than a full list of embedded tweets: 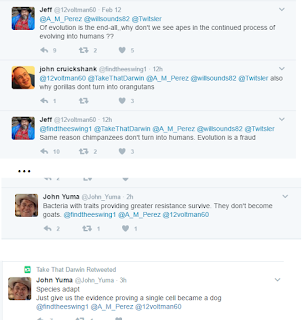 ---
Added hours after posting:
A Quora answer to a question regarding creationists' concept of fossils defending the theory of evolution. T-rex to chicken, wolf to insect...

---
In the field of physics and ICR (I have bolded the word 'evolutionists'; other bolding is original):


The observed rotation speeds are so fast that if our galaxy were more than a few hundred million years old, it would be a featureless disc of stars instead of its present spiral shape.1 Yet our galaxy is supposed to be at least 10 billion years old. Evolutionists call this "the winding-up dilemma," which they have known about for fifty years.


Many comets have typical ages of less than 10,000 years.4 Evolutionists explain this discrepancy by assuming that (a) comets come from an unobserved spherical "Oort cloud" well beyond the orbit of Pluto, ...


If you can show me where a bird turned into a fish, or a reptile into a mammal , or heck just show me one shred of evidence among phylum, where a tiger turned into a zebra both animals 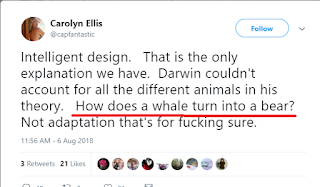 
I have not found one chart that takes you from the Tulip to the Butterfly, or what ever process was needed to jump species.


. No one has ever observed fish to men, horse to dogs, cats to frogs etc.

Matt Wayne’s answer to how do atheists think the first ape was born
It will indeed Matt. The fact that dogs don’t become cows is a prediction of the theory.

No, no one has ever seen dog-to-horse evolution. This is what needs to be ‘’observed’’, one kind becoming an entirely different one.

Matt Wayne's answer to Has evolution been experimentally observed? If not, (how) could it be experimentally verified?
-
This gentleman thinks we need to see sharks becoming human:

Are you serious here? Go look at the picture of one or a few, do they really look like they are on their way to actually walking or becoming a man, or actually anything else but what they are a shark, oh a walking shark? (LOL)

From Quora, Given the discovery of walking sharks, how can creationists continue to deny Darwin?
-
Feb 27, 2020
It is your burden of proof. Sow me evolution, and by evolution I mean the transformation of a frog into a human.


Added Oct 7, 2020 For Quora, another who has no idea what evolution means. "his is not the case, people will just try to explain why there isn't fish-frogs, and flying- deer or fish growing arms and legs."
Aug 19, 2021, from Quora:
Give me one observable evidence of a change of kind throughout the history to prove that the evolution theory is a fact? For example a bird becoming a lion or a fish becoming an elephant, not a bird becoming a different type of a bird?
Quora is the gift that keeps on giving!
August 29, 2021:
How did fish give birth to monkeys? And how did monkeys give birth to humans?
Thank you Randolph Redd.
-
Posted by Surprises Aplenty at 08:25