This is my first post here and I want to get into the meat of an argument I've had with a creationist here in Busan.  Still, some background is probably necessary.

My creationist coworker sent me a long (20 page) discussion of why secular science is wrong about the age of the Earth.  That was the first article he gave me.  He has now sent me four or five and all of a similar length and breadth.  There are two problems with much of the stuff he sends me.  Well, two problems that affect my ability to respond.

First, although he gives an enormous number of references and links, he has admitted that he has not read all of them.  To my uncertain knowledge, of the 39 bullet point examples he gives showing that modern science's aging techniques are wrong, he has read fewer than 10% himself.  I believe this to true for all the references and mined quotes he offers.  I feel that with his name on the article, all errors affect his credibility.
Second, he occasionally covers material that I don't understand well enough to critique and I don't think he understands well enough to use as a defense.  For example, I know the absolute basics of radiocarbon dating and nothing of the practicalities.  How does one collect a sample and ensure it is not contaminated?  I don't know.  For me, this is reason enough to read the articles with interest but not to post them with my stamp of approval.  I'm not asking for expertise - that would be hypocritical- but when I offer a link, I do so only if I understand the concepts.

The article I'm starting on today covered many aspects of how to date the Earth or what is wrong with dating methods that give answers greater than 6-10,000 years.  This article had many different articles and links in it and I am looking at one of these titled, "Ice Core Sample Dating/ The Lost Squadron".  The original was by Carl Wieland and my coworker appears to have copied it in its entirety from creation.com/the-lost-squadron although the article contains a hyperlink to Answers in Genesis.  I don't think there are copyright issues as he has given links and this means I can share a link the original article.

In brief, the Wieland's article attempts to show why ice cores taken from Greenland glaciers cannot show ages of tens of thousands of years.  That material would be rather dry, and is in fact untrue, so he uses the dramatic true story of a fleet of US fighters and bombers that crash landed on the island as a disguise or hook.  Indeed, of the fifteen or so paragraphs, ten describe the fate of the aircraft and only a few actually discuss ice cores.  One of the key excerpts:


The article is amazing as a tutorial in how to lie by omission.  One would imagine that the ice cores were taken very near the crash-site. but the two are in fact hundreds of kilometres apart and in what I would describe as different climatic areas.  The planes are near the coast where they receive ocean-effect precipitation (Wikipedia - short version: lots), while the ice core site is more than a hundred kilometres inland.  Here is all the location information given:
Regarding the planes: "Realising that their only hope was to crash-land on the icy wastes of Greenland’s east coast, they desperately searched till they found a break in the cloud cover."
And here is everything the article has to say about the location of the ice cores: " "

On maps, the two locations are clearly distant. Further, one is quite distant inland, while the other is on the coast. Maps (Glacier Girl, Eismitte): 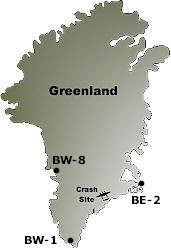 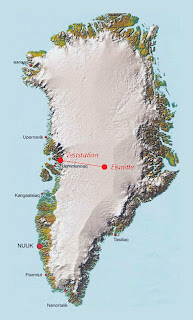 A possibly more accurate map of the ice core site is here.

Why is it important that one site is on the coast and the other more than a hundred kilometres inland?  Because of something called Ocean Effect Snow.  This is also known as Lake effect snow and simply describes the phenomenon of greater snowfall occurring close to unfrozen bodies of water than distant from water.  Greenland's coast around the crash site received about 1.5 metres of snow per year but that does not mean that inland site would get a similar amount.

More recently (and from a different, but nearby location): 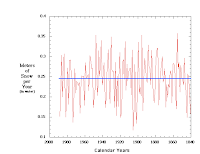 Both show average snowfalls of less than half a metre - the average in the image is 0.24- metres.
---
Added later: True Size Map shows the size of countries without distortion brought on by using a Mercator projection map.  Because Greenland is so far north, it looks huge.  In True Size Map, I pulled it down to the continental USA and it is a lot narrower there - but still longer North-South than the USA so clearly saying the two events are in Greenland cannot mean they must have similar weather conditions 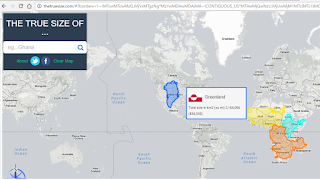 I believe I have shown why Weiland's article cannot be trusted and is probably deliberately dishonest.  Is there more to the story?  Yes, thanks for asking.


In fact, ice cores in Greenland are used for dating, based on the belief that layers containing varying isotope ratios were laid down, somewhat like the rings of a tree, over many tens of thousands of years.

This is the only description of how secular scientists (should those two words be in quotes?) determine the age of segments of the ice core.  There is no attempt to show why varying isotope ratios should be incorrect either.  Left out of Weiland's work is how ice cores can be calibrated by looking for volcanic ash from known eruptions.

To summarize, not only are Weiland's conclusions wrong, they show a strange combination of in-depth research on certain areas and no research on others.  The highest quality of research is on matters that do not relate to the controversy being discussed.  For example, we learn what device is used, and what it's parameters are, for melting the ice to reach the planes, but no details on where the planes were found compared to the location of ice core drilling site.  Further, they the two locations are suggested to be near one another -note the quote about 3000 metres of ice equalling 2000 years accumulation as if those 3000 metres were in the same climate zone.

------
The story gets more disturbing when I relate a verbal discussion I had with my coworker about these issues.  He brought up two rebuttals to my claims.  They were:
1) moraines Dang it, what is the term?  The formation of lakes of liquid water somewhere on the glacier- The water in these locations could have been responsible for higher snowfall rates at the ice core sites.  He used the right term, but I have forgotten what it is.

2) The theory that where there is more snow on the ground, that place receives more snowfall.

To my knowledge, the liquid water found on the glacier is a sign of a drainage area that sometimes becomes blocked and fills.  These are not large enough to affect local weather and the direct measurements at the ice core sites given above show the snow fall was much lower than at the coast.

His second claim was clearly off the cuff but it still bothers me.  To defend the claim by using the word 'theory' as if more than one person believed it seems deceptive.

Regarding The Lost Squadron article, I am willing to give my coworker the benefit of the doubt, but I feel I need to repeat that Weiland showed strong research skills when describing the aircraft and their manner of removal from the ice to have accidentally missed: 1) the great distance between the two locations, 2) the observed snowfall records at both locations and 3) the many ways in which the ice layer can be dated and how these different methods have agreed with each other.
Status: Deliberately deceptive!
-----
Later additions: Talk origins briefly discussed the subject on their feedback page in march '99.  I suggest visiting the page and using the 'find' option in the 'edit' button of your browser to find it.

Talk Origins has another page on the subject with a copyright date of 2007 and an information page on ice core dating.

Posted by Surprises Aplenty at 07:36