Coral growth rates and the age of the earth


From my coworker's letter "Dating the earth-3"*:


These are ONLY the observed rates of coral growth.  Faster or slower rates may have that haven’t been observed.  In 1992, this coral in the picture above was found on a shoe that was less than 4 years old.  This shows that coral growth can sometimes be extremely fast.

This image was in the email but also can be found here.


For Enewatak’s rate of growth, we only have recent observations.  Many things can cause drastic changes in the rate of growth and we don’t know the rates of growth for most of the past.   Which rate happened at Enewetak? Nobody has been watching and measuring the Ewenetak coral reef for 5,000 years, so we don’t know.  Science can only guess what might have happened.  Skeptics choose the 5mm rate. Creationists choose the 200-400 rates.  Both are using a lot of faith.  It does seem logical to match the fast rates with the thickest corals on the planet, but this is just a logical guess and cannot be proved scientifically.


Here is the problem: Coral reef growth rate appears to be conflated with Coral growth rate.  The difference? Corals obviously grow faster than the reef they are part of.

Let me take a moment to explain this.
First, here is Staghorn coral. 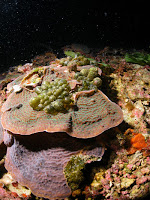 Finally, here is a gorgonid coral. 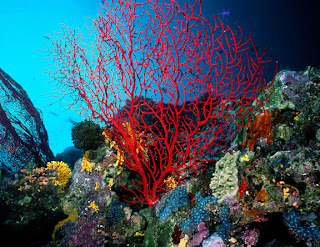 If that brain coral grows 414 mm a year, it looks like it would fill a two-metre diameter hemisphere in about two-and-a-half years.  That is, it would be one metre tall and two metres wide and all that volume would be filled.  This clearly is not true for the other three examples.  If the coral on the shoe, offered as evidence of a high growth rate, were ten centimeters tall and twenty wide, we would not say the reef had grown by this much.  Most of the volume is open sea-water, not solid material.

My coworker's letter included several links.  One was to an article at grisda.  At grisda, my point is repeated:


The fastest growth rate reported for any coral is the staghorn species Acropora cervicornis (Figure 4). Lewis et al. (1968) found in Jamaica a maximum rate of 264 mm/year. Shinn (1976) studied the growth of this species following destruction in a hurricane near Florida. He estimated linear growth rates of 100 mm/year. He also found that because of the branching habit (several new branches added to a single previous one) much more than the linear growth of a single branch is involved in establishing a dense stand of this coral (see Figure 3 for an example). Under these branching growth conditions, carbonate production would be more geometric than linear and could contribute further to the carbonate mass of the reef. Gladfelter, Monahan and Gladfelter (1978) report rates of 99 mm/year for Acropora palmata in the Virgin Islands. Some massive corals (Figure 5) grow much more slowly.

The Cervicornis is a kind of staghorn coral and there is an example of a 'massive coral' that is a brain coral similar to the image I used above.  Both of these corals are familiar to me as I spent time diving on coral reefs and studying them as part of my degree in biology.

Another problem is the source of the 414mm/year growth rate.  It is from an 80 year old paper (J. Verstelle, ‘The Growth Rate at Various Depths of Coral Reefs in the Dutch East-Indian Archipelago’, Treubia 14:117–126, 1932.) and I don't believe any modern paper suggests growth rates nearly as high.  A third and very-related problem is that neither my coworker nor I have read this article.  For this reason, when I proclaim a status below, I will not be calling this claim 'intentionally deceptive' as I don't have enough information to make that call.  I do have enough to information to say this claim is very weak.

Slow growth or rebuttals of above:
earthhistory
exploring our matrix
talkorigins
-------------
Status: Weak.  I am satisfied that this claim does is not supported by evidence and that coral growth rates support an old earth.  As I have not read the Verstelle paper (414 mm/year growth rate), I cannot say this argument is debunked, but I do note that no one seems to quote the contents of this paper, only that one number.  This has to appear suspicious.

--------------
*The original email he sent me was "Dating the earth-1".  I don't see any differences in the letters but I suspect that the sections of short quotes has been changed or expanded.  This document (Dating the Earth-3) can be found online by searching for some of the quoted text.
Posted by Surprises Aplenty at 16:08