Quotes from Experts onDating about Gigantic Errors In Dating Methods

Examples of where uniformitarian dating has been shown to be wrong.:

16 A living water snail taken from an artesian spring in Nevada was given as assessed age of 27,000 years. Science, Vol. 224, April 6, 1984 p:58-61  The original article explains that C14 dating works when living things get their carbon from atmospheric sources. But, for many years, evolutionists were claiming C14 could be used for dating all sorts of things, including living things. (check this for accuracy).

Indeed, check it for accuracy.
The abstract for "A living water snail taken form an artesian..."

Carbon-14 contents as low as 3.3 ± 0.2 percent modern (apparent age, 27,000 years) measured from the shells of snails Melanoides tuberculatus living in artesian springs in southern Nevada are attributed to fixation of dissolved HCO3- with which the shells are in carbon isotope equilibrium. Recognition of the existence of such extreme deficiencies is necessary so that erroneous ages are not attributed to freshwater biogenic carbonates.

If you don't understand my concern, let me explain where Carbon-14 comes from: 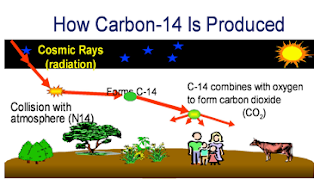 To have some understanding of how carbon dating works I will describe it for you. Basically the sun shines down on the earth's atmosphere, which is composed mostly of nitrogen 14. By the sun shining on the atmosphere it makes the nitrogen 14 or (N14) atom unstable changing into a carbon 14 isotope or (C14). The small amount of C14 made each day combines with our normal carbon dioxide. Organic objects such as people, animals, and trees are either taking or breathing in carbon dioxide every day. When an organism dies it will no longer take in any more C14. So the C14 unstable isotope continues to decay. Scientist measure this decay time by a unit called half-life. The half-life of C14 is 5,730 years. Scientists then take what organic item they want to date and find out how many half-lives have passed on that object. Thus the date of an organism is found. See figure 1 to visualize the paragraph above. See the figure to visualize the paragraph above.

This quoted section and image come from We Need Intelligent Creation Education and from the article 'Dating the Earth-3'.

So, for radiocarbon dating to work, the Carbon-14 needs to come from the atmosphere in the plant material and gathered through photosynthesis or from the plants the animal eats.  Note that the Science abstract specifically states that the shell of the snail is made from carbonate in the water, not from food the snail has eaten.  The article in Science is not at all showing that radio-carbon dating is wrong.  It is showing that the source of carbon needs to be known.

Little Timmy goes to language school for a year and studies very hard.  Then he takes a proficiency test.  His mother comes in, furious."My son studied here for a year and look at his proficiency score.  He scored 5% on his TOIEC (a standardized test for English ability).  Therefore your methods here are terribly wrong!"  She says.
The school director looks at her quizzically, then responds, "You do know this is a French language school, do you not?"


My original concern, the one that eventually led to this blog, is that Evolutionary (or mainstream scientific) claims change with new evidence while creationist ones do not. I think everyone would agree that many scientific claims have been changed with new evidence - this is a strength, not a weakness!  The sub-title of the quoted section is "Examples of where uniformitarian dating has been shown to be wrong."  These days, I only hear creationists using the term 'uniformitarian' but what we have seen, and what the cited articles describe, is how to improve dating techniques.  The sub-title could be "Examples of where uniformitarian dating has been shown to improve".

---------------------
'Dating the Earth-3' is a long article and my goal is to break it up so that individual pieces can be examined in depth.  One problem I have is that I am going into far greater depth than my coworker did in making the article.  I specifically asked him where I could find the articles he references and quotes from and he replied he had not read most of them himself.  I feel this means I need only show how a few are deceptive.  If he has researched these claims properly, then any serious rebuttal (more than typing errors or the like) of even one claim throws all the rest into doubt and harms his perceived honesty greatly.  If he has not researched these claims, then any serious rebuttal of even one claim throws all the rest into doubt and shows him to be a bad researcher, although not a deceptive person.

As examples of articles I do not feel he has read, see the above two referenced above and these:

"There has been in recent years the horrible realization that radiodecay rates are not as constant as previously thought, nor are they immune to environmental influences. And this could mean that atomic clocks are reset during some global disaster, and events which brought the Mesozoic [era] to a close may not be 65 million years ago but, rather, within the age and memory of man." Written in Frederic B.Jueneman, "Secular Catastrophism", Industrial Research and Development, June 1982 p:21

The Antarctic Journal of the United States is only available online form 2005 so am certain that he could not have read it.  I have not either, but suspect that it may have included information like this:

The seals feed off of animals that live in a nutrient-rich upwelling zone. The water that is upwelling has been traveling along the bottom for a few thousand years before surfacing. The carbon dioxide in it came from the atmosphere before the water sank. Thus, the carbon in the sea water is a couple of thousand years "old" from when it was in the atmosphere, and its radiocarbon content reflects this time. Plants incorporate this "old" carbon in them as they grow. Animals eat the plants; seals eat the animals, and the "old" carbon from the bottom waters is passed through the food chain. As a result, the radiocarbon content reflects a mixture of old radiocarbon, which is thousands of years old, and contemporaneous radiocarbon from the atmosphere. The result is an apparent age that differs from the true age of the seal.

Notice that all of the examples given of discordantly dated artifacts result from organisms from aquatic environments or which obtain significant amounts of carbon from aquatic sources. Since carbon in aquatic environments may have long since have been removed from atmospheric sources, it will have depleted its ratio of C14 to C12 already to some degree even before incorporation into the organism eventually tested. Trying to produce a C14 date when the initial assumptions are violated is not likely to succeed.

My second quote is from October '99, so this information has been available for more than ten years.

As for the quote by Jueneman, no such article exists online nor can I find any journal with the fairly generic name of Industrial Research and Development.  If such a journal exists, from it's name, I cannot see it being a strong forum for "Secular Catastrophism".  If such a journal and entry exists, my bet is that this is a letter to the editor, not a peer-reviewed article in it.
---------
Status:  These quotes, divorced of all outside context, have to be questioned and treated skeptically.  I have shown how a very few are incorrect and plan to look at more, but again, I feel I am putting in more work than my coworker did in listing them here.  They may have started as innocently wrong, but after ten or more years without fact-checking, they are close to being deliberately deceptive.  Because the man is my coworker, I cannot go that far.  Innocently Wrong
Posted by Surprises Aplenty at 08:18