reactions from the Nye/Ham debate (split from previous post)

In a recent previous post I had posted my reactions to the debate and reactions from the internet.  The post was becoming too long so I have snipped reactions from other sites and posted them here.  The first half of the post, my own live reactions, are here.

In addition to dividing the post in two, I have added further details to this one.

There is a very interesting consequence of how the rnk-citT module originated. While Ham did not make this argument, other creationists have asserted that Cit+ arose simply by a loss of gene regulation, because they have the notion that evolution can only break things.  However, the duplication that gave rise to thernk-citT module caused no such thing.  There is still a copy of citT that is linked to the same adjacent DNA sequence as before, and there is still a copy of rnk that is under the control of its own promoter.  In other words, the cell got something new without losing anything old.When they actually bother to explain all of that, creationists still dismiss Cit+ as being an instance of evolutionary innovation because it involved the rearrangement of existing components.  True, the duplication responsible for Cit+ did rearrange components that were already there, but that rearrangement generated a new association between components that did not previously exist, and it produced a new function that also did not previously exist.  To argue that rearrangements cannot produce innovation is akin to arguing that a novelist has done nothing creative in writing her novels because she only used words that already existed.Ham also made a demand that is common among creationists that betrays a fundamental misunderstanding of evolutionary theory. In the later debate segment [starting at ~2:30], Ham says, “What Bill Nye needs to do for me is to show me example of something…uh, some new function that arose that was not previously possible from the genetic information that was there. And I would claim and challenge you that there is no such example that you can give...

"Last night, it was easy to pick out the smarter man on the stage. Oddly, it was the same man who was arguing that the earth is 6,000 years old. ""Ham had nothing to lose. When you exist on the cultural fringe and make your living by antagonizing established authority, there’s no form of media attention you don’t love. All Ham had to do was sit still for two-and-a-half hours, sound vaguely professional, and pander occasionally to his base. Sure, if you listened closely, what Ham was saying made absolutely no scientific sense. But debate is a format of impressions, not facts. Ham soundedlike a reasonable human being, loosely speaking, and that’s what mattered.""There are those who will claim a victory for Nye. He did have his moments. Near the end of the debate, Nye found his footing, speaking passionately about the joys of scientific discovery. Doing so, he highlighted the degree to which creationism is a decidedly incurious, insular worldview. Ham was at a loss for words only once during the whole debate, when an audience member asked what it would take for him to change his mind. By contrast, Nye seemed most alive when talking about all the things that he couldn’t explain."

I think the Bill Nye-Ken Ham debate (liveblogged by me and Hemant) turned out to be a net-win for science and reason. I know that many of us in the skepto-atheosphere disagree; that the debate put reality on the same plane as nonsense, or thought that Nye wasn’t up to the task of fully enlightening Ham or his audience. I understand and respect those criticisms, but I think they overlook what Nye really did accomplish.

---
AIG feels the media is split on who won.
---
Via Kottke, Phil Plait answers some questions brought up by creationists at the debate.
---
Nye Vs Ham or (Nye v Sham) on Twitter.
And the Top 10 Tweets from the debate.
---
They seem kinda cranky - although right- at the happy place.
---
Livebloggers:
Pharyngula on the debate.
The Friendly Atheist.
---
Buzzfeed on the debate from a reporter who was there.
---
Pat Robertson on the debate.
---
The following two links have (thankfully low volume) autoplay video ads on their sites.
Christian Today's poll says Nye won by a landslide. And Christian Post offers five arguments from the debate.
---
Business Insider calls the debate for Nye.
---
22 hand written and photographed questions by creationists at the debate for Nye were answered by Ethan Siegel.
...and by Phil Plait.
---
World Net Daily has reviewed the debate.  And Dispatches from the culture wars has torn that review apart.
---
Don Prothero was Nye's coach.
---
Not from the debate, but interesting: The Bible is wrong, there were no camels in Egypt during the era described in the Bible but they were there when it was written.
---
Added Feb 15 but from an email sent on Feb 8: 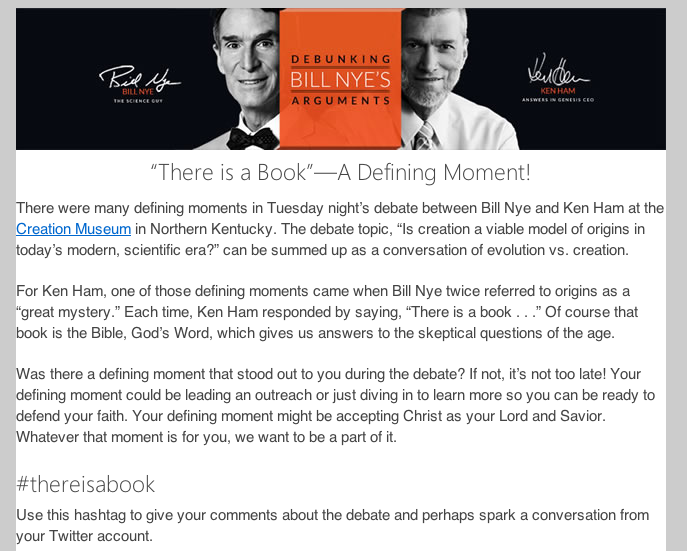 I find it interesting that Ham is proud of "There is a book" while Nye supporters find it the exemplar of his problems.
Ham's youtube channel.
#thereisabook hashtag at Twitter:

Posted by Surprises Aplenty at 15:51