Reactions to the Ham vs Nye debate

This post is not finished but I don't know when that will be.  I watched the opening of the debate live, then stopped and drove to my in-laws and watched the last hour or so.  Then I began watching again and have made it to one hour, thirty-nine minutes.  I do plan to see the fifteen or twenty minute gap.

A friend described those who found Nye the clear winner to be displaying confirmation bias.  I had made similar, but less eloquent, statements so I was pleased to see my own conclusion reinforced.  Still, Nye did a lot right.

I guess I need to give some specifics at the start.  On Feb 4, Ken Ham defended the proposition that Creation is the most viable model of origins in today's modern, scientific era against Bill Nye, who defended evolution.  The video is available at a few locations but I don't know for how long: try here, here and here.

My own impressions:
Ham is getting mileage from his previous debate -at Harvard in the '90s.
Ham has a degree in applied science -emphasis in environmental biology.

five minute intro: Ham begins the attack and offers scientists who accept creationism but do science. Of course, they don't appear to use creation science in their work. Then, he gets into his personal division of science into observational and historic focuses.

Nye takes his time to gain some acceptance by telling a pretty good, but long, joke.  Then he uses the example of CSI to tear down the idea of two kinds of science.
Billions of people are religious but not creationists.

thirty minute talks.
Ham: More professional scientist claiming they are creationists without any appearance of using creationism in their work.
Ham and one of his scientist discusses Lenski's work: The ability to grow on citrate is not complex new ability.
Andrew Fabich: E-coli supposably evolving.  The information is already there - it's just a switch that's turned on and off.  There's nothing new. ... Later, Dr Lenski and his student read Fabich's claim in horror and have responded 1, 2, 3.  I have excerpted a few paragraphs from the third link below in my notes of reactions to the debate. (More about Dr Lenski.)

"Darwin was racist." From a book -not necessarily by Darwin - "The highest race of all, the Caucasians..." Everyone from the 1800's would appear racist to us today. Australians, Ham's own nationality, had some racist image problems even just a few decades ago.

I just remembered how to do screen shots: 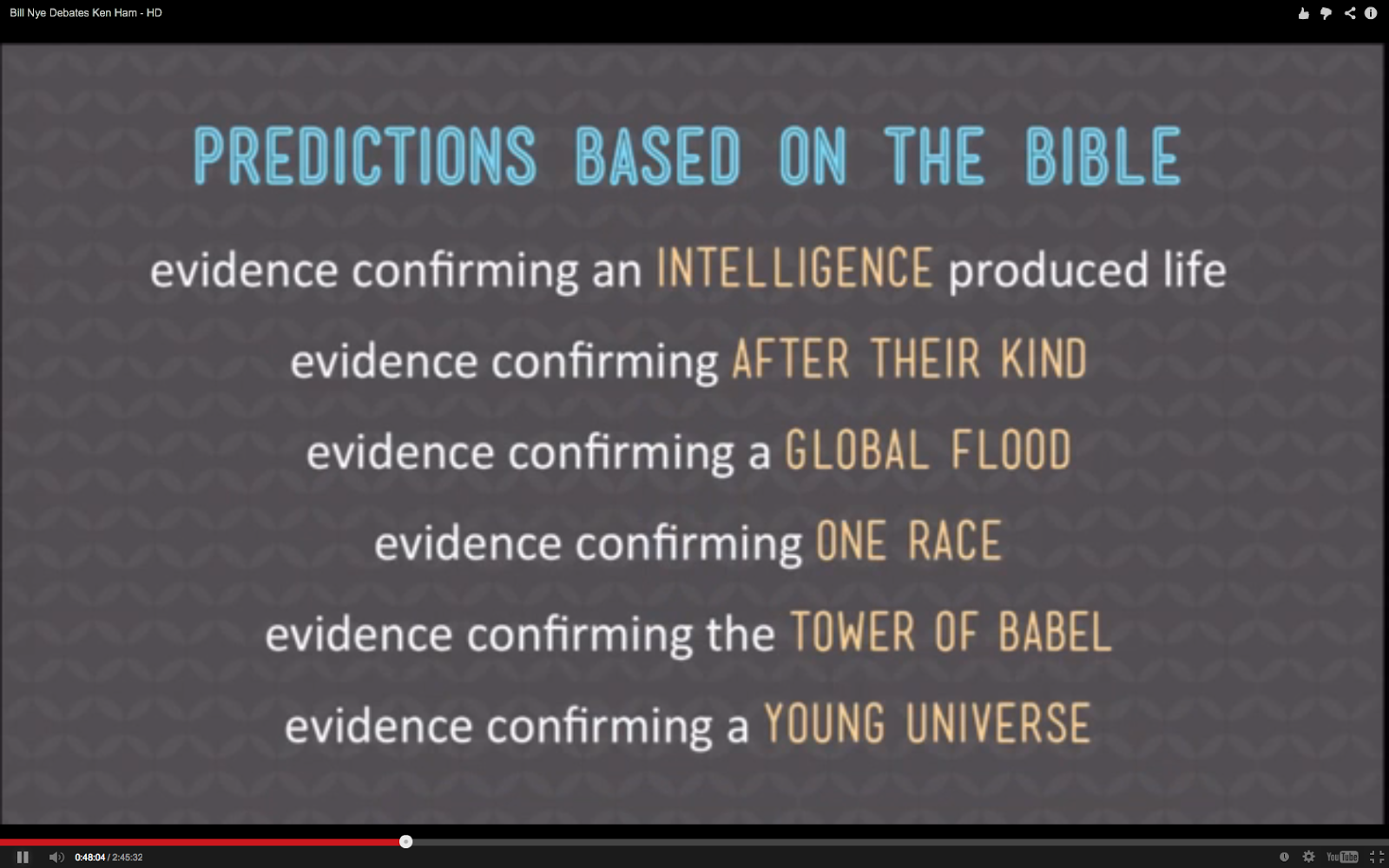 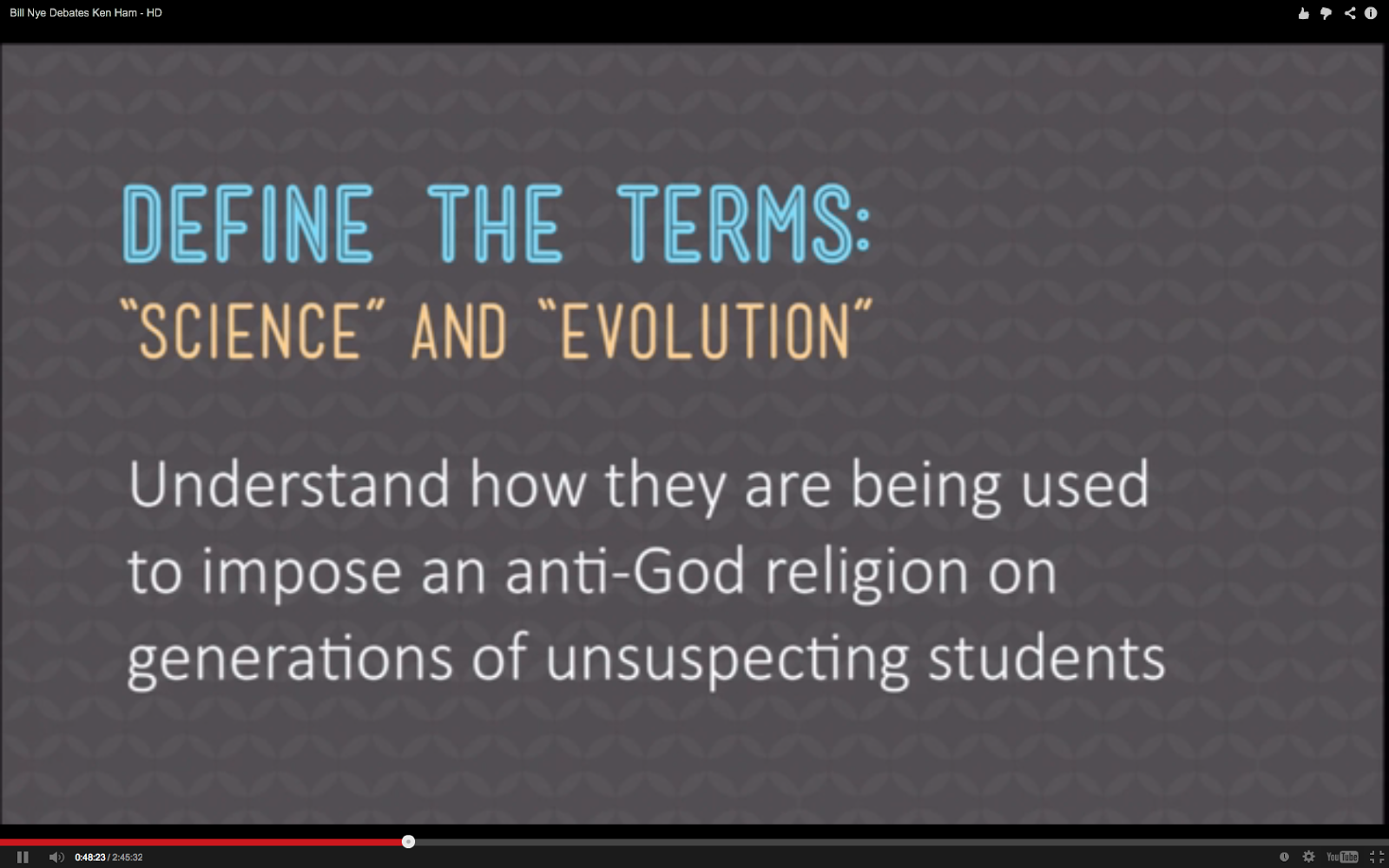 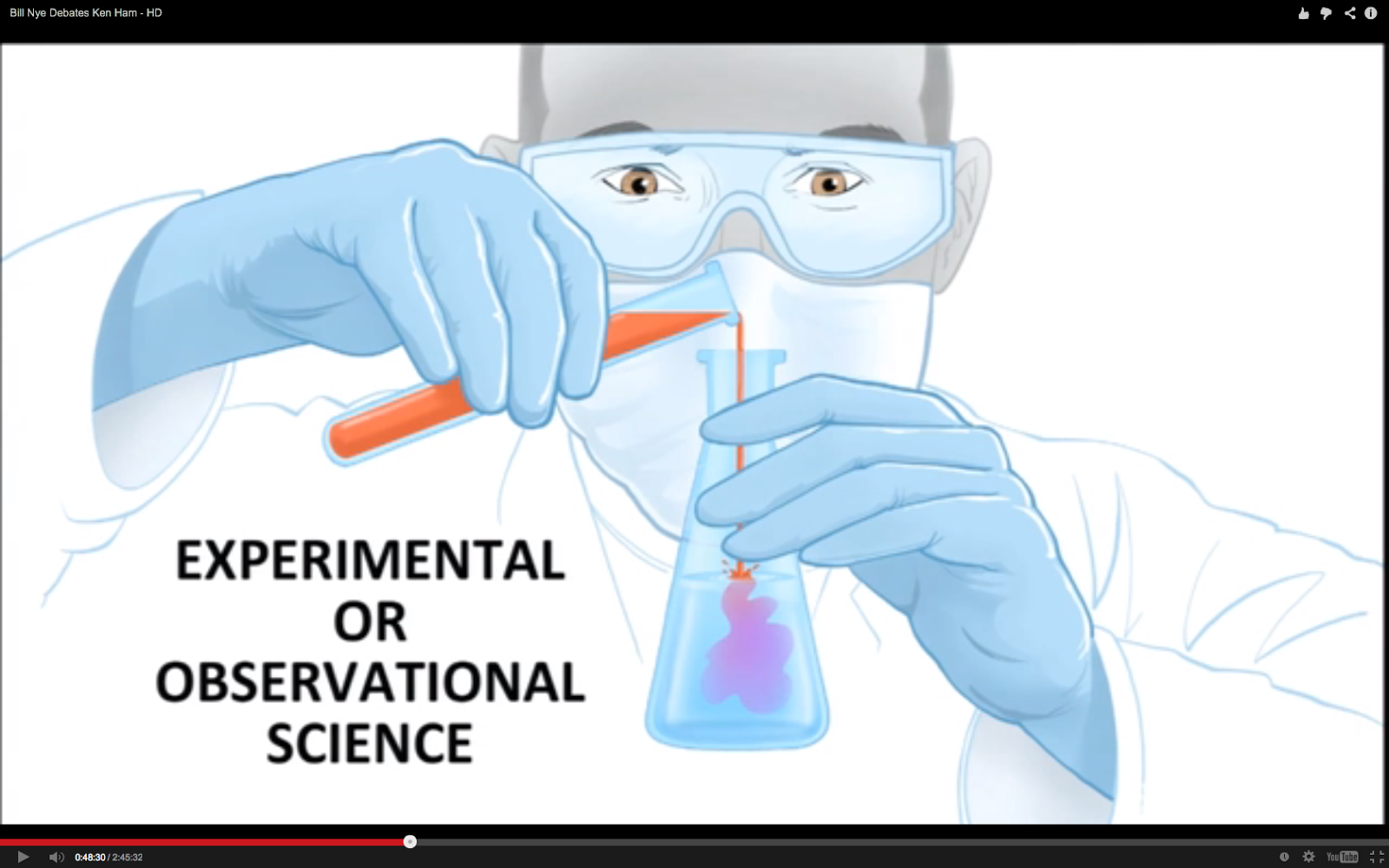 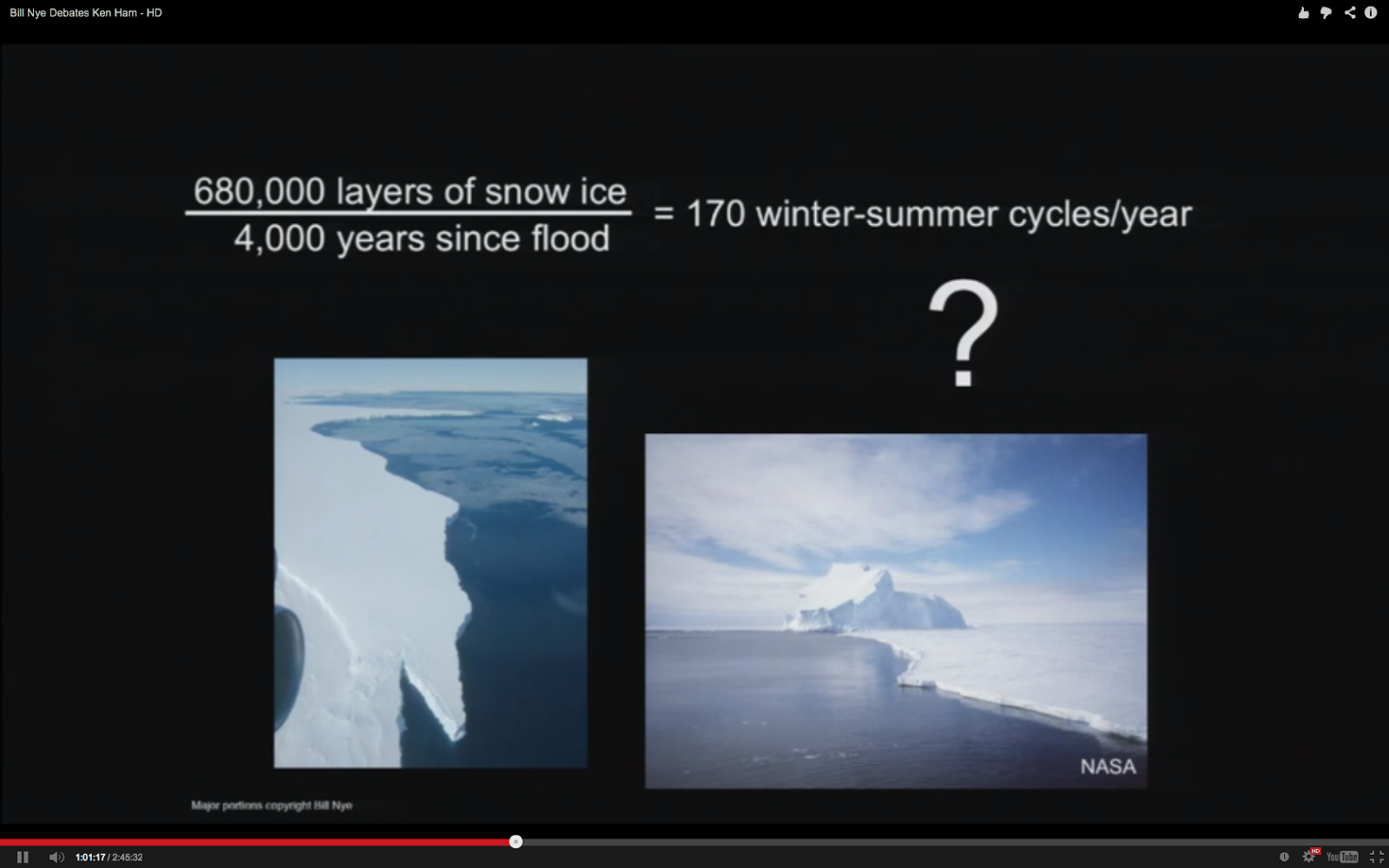 "Your claim, for me, is not satisfactory." An elegant statement but not a thrilling one. 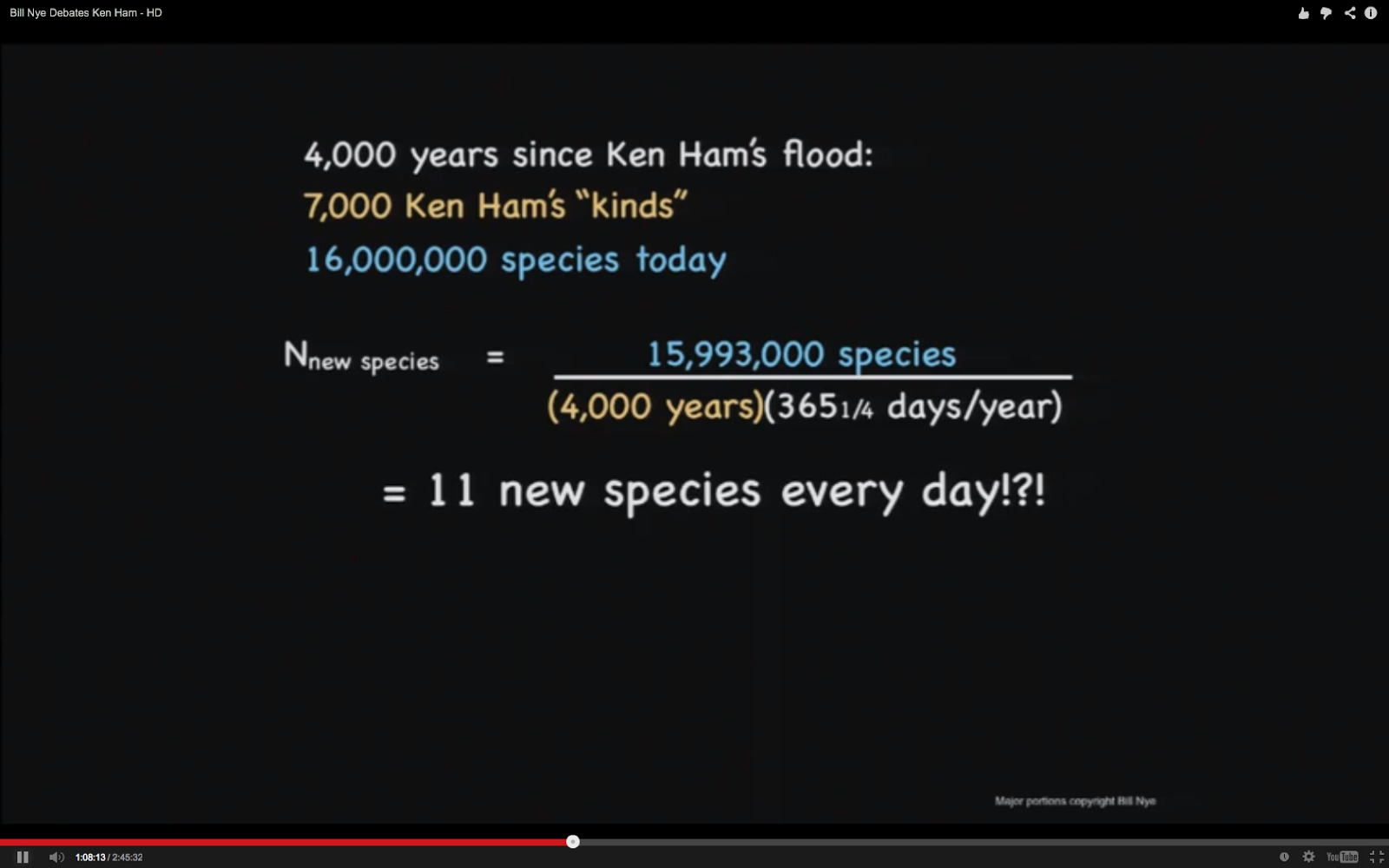 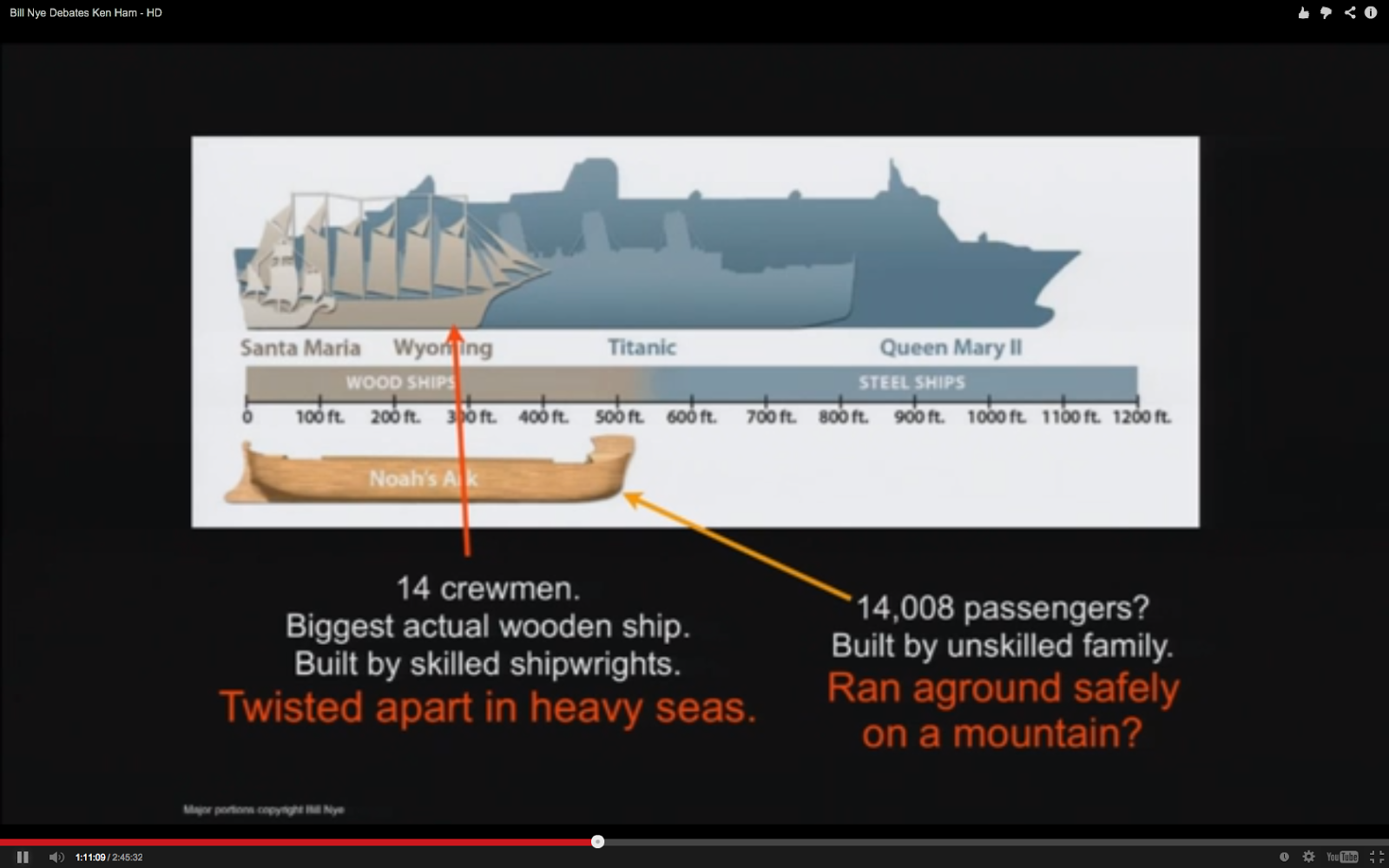 Around 1:20, Nye talks about the Big Bang Theory. This is important stuff and you need to explain the small details, but it takes a lot of time and comes off as a little dry at a debate.  I hope creationists were listening. 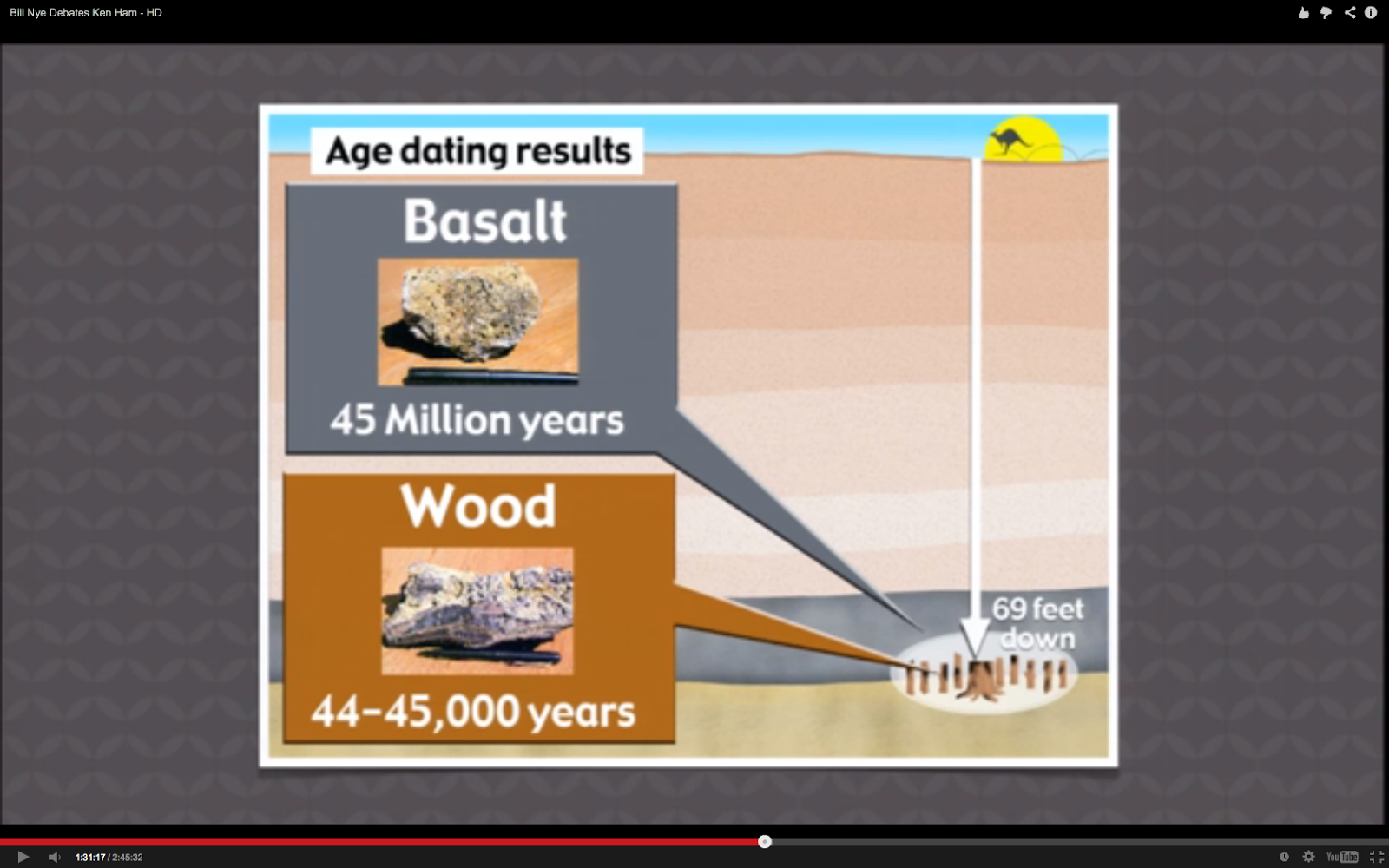 "The point is, there's a problem." - Yes, there is. The radiocarbon dating used on the wood can only give results up to around 50,000 years so a result in that range is equal to a pegged needle.  To suggest otherwise is dishonest. This claim can also be found at creation.com  and the original source, 'research' by Andrew Snelling is at the same site.   Gondwana Research looks into a similar claim here.

The more I think about this, the more impressed I am with Ham's daring, with his cajones (it seems less crude in a foreign language).  If Nye had understood how radiometric dating worked -and why didn't he, this was an obvious direction for a Young Earther to go? -he could have exposed clear dishonesty on Ham's part. 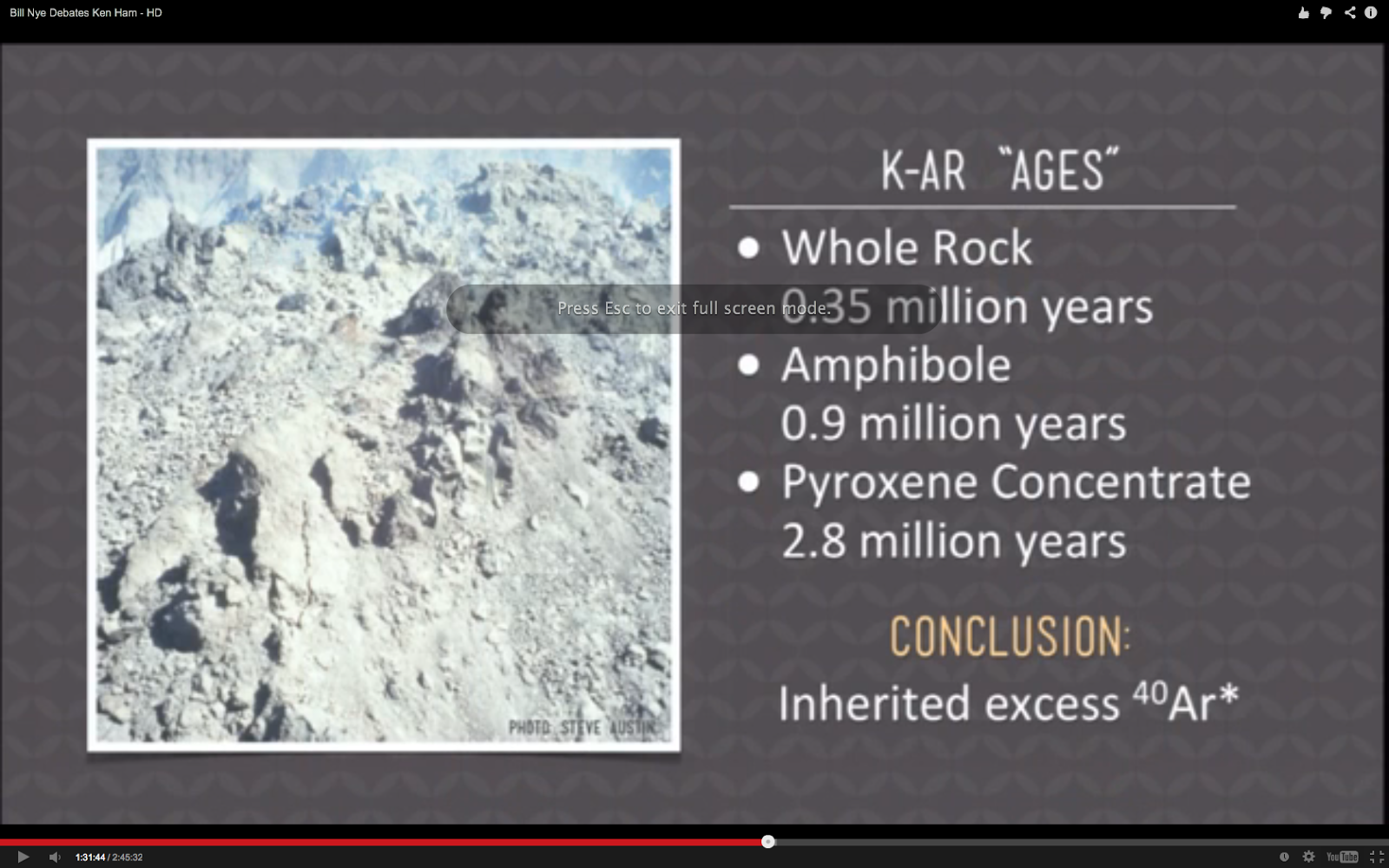 There is a big problem.  From Wikipedia: "Due to the long half-life, the technique is most applicable for dating minerals and rocks more than 100,000 years old. For shorter timescales, it is likely that not enough Argon 40 will have had time to accumulate in order to be accurately measurable." 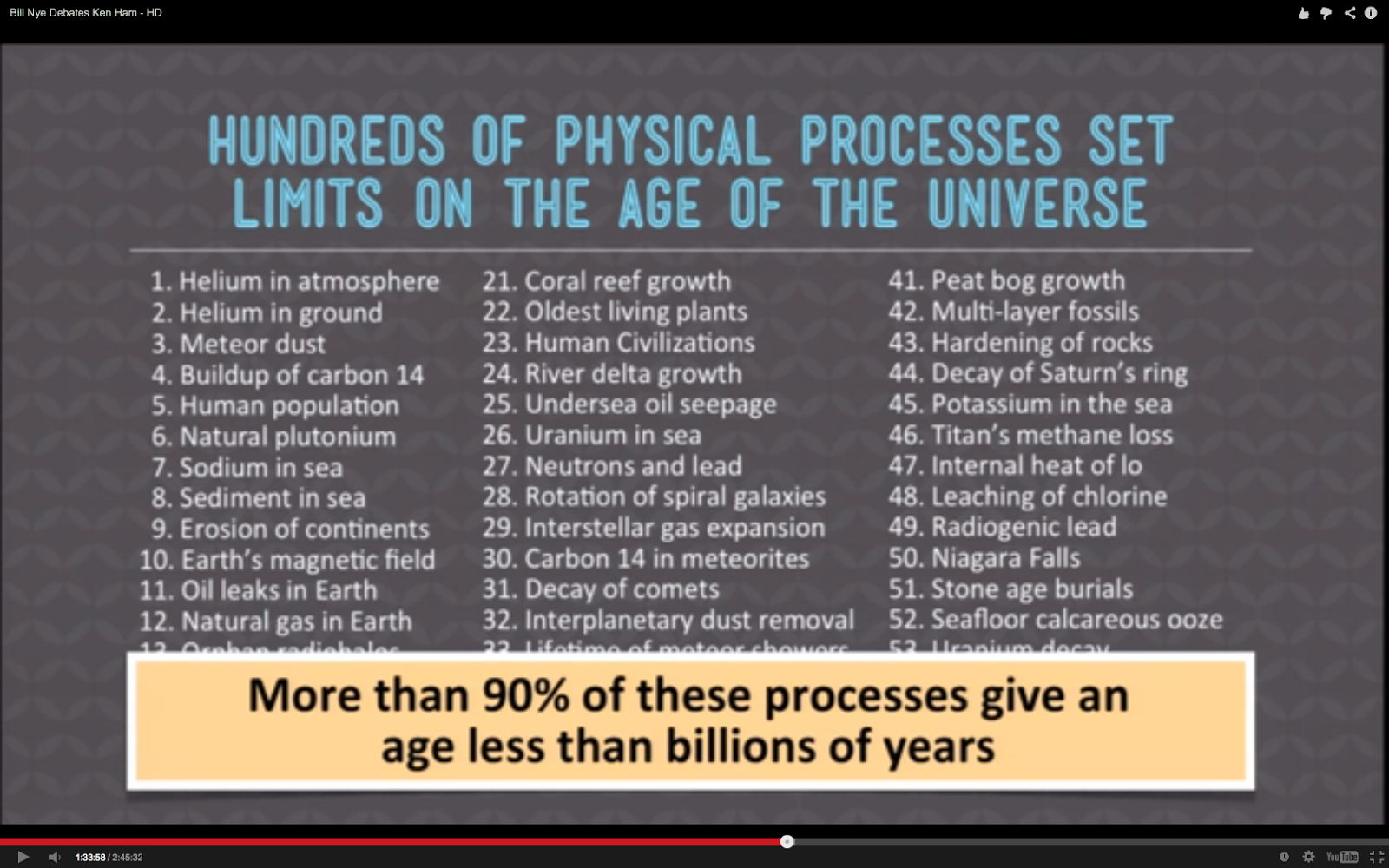 Nye:
Didn't understand about radiocarbon dating - dang it!!! Attempted a rebuttal and moved on.
"Were the fish sinners?"
On Ham's claim that you cannot see the past, "but that's what astronomers do."

2nd rebuttal
Ham:
"What is a kind? ...  Predicted less than a thousand kinds on Noah's ark."
1:42 - planes in the ice on Greenland. Wow!  and Wow!
Bears have teeth very much like a lion or tiger.  Look at a panda's teeth - it looks like it should be a savage carnivore.
Okay, I just searched with Google images for lion, bear, panda bear and Australian fruit bat teeth.  All have big scary canines.  The bears and bat all have grinding molars and the lion has only cutting teeth.  I guess he figures Nye can't do the search in time for his next turn to talk.

"The Chinese and the Egyptians built big boats. Research shows some had three layers interlocking so they wouldn't twist like that (like the Nye discussed a giant American wooden ship had twisted and leaked)."  Right, except the only place i can find news of three interlocking layers is at Creationist websites and there is substantial disagreement about whether the giant Chinese ships were actually built (some claim they were and did sail to India and elsewhere, others say they only floated in a sheltered lake, others say they may have existed on land and finally some say they were never built).

Nye:
1000 kinds makes Nye's criticism even stronger - instead of needing 11 new species to appear every day, now we need 35!
Nye claims some knowledge of shipbuilding and is skeptical that Noah could build the Ark with seven others.
"...explain to us why we should accept your word for it that natural law changed 4000 years ago, completely, and there's no record of it.  You know, there are pyramids that are older than that."
It is not reasonable to me to believe that everything changed 4000 years ago: species, the surface of the Earth, the stars in the sky and the relationships of all the other things on Earth to humans.

Evolution is not exclusively atheistic.

We need scientists and engineers.
---

Questions from the audience
1st question - Nye asks ham if he can predict something
2nd What was before the Big Bang?  Nye: I don't know - it is wonderful!
Ham: "There is a book..."
3rd dating techniques
Ham:....appendix is very important to the immune system -
...I did make predictions....one race, God made kinds
4th question - how did consciousness come from matter
Nye: "Don't know.  It's a great mystery. ...The joy of discovery."
Ham: There is a book" .. debaters both beyond debate subject....  Ham: after you die, you are gone, why bother with discovery?
5th question "What would change your mind?"
Ham:  long answer  "No one's ever going to convince me that the word of God is not true."
The model of the flood is subject to change but the fact of the flood is not subject to change.
Nye: We would need evidence. Bring on any of those things and you would change me immediately.
--
6th question: radiometric dating
Nye the science is strong on radiometric dating
Ham: showed slide from before "Hundreds of physical processes..."
This is a form of the Gish Gallop.  I know the coral reef claim is wrong and I'm pretty sure the meteor dust one is, too.  Note that Ham doesn't even try to defend any of them so what is Nye to do, attack 50+ in his next turn.  And even if he did, from the little info Ham offered, Ham could say, "No, I meant a different form of meteor dust buildup" or the like.

7th Question for Ham: Compare the rate of continental plates today to the rate 6000 years ago.
Ham: There was a catastrophic breakup.  Historic V observational science.
Nye: It must have been easier for you to explain this a hundred years ago.  The evidence of reversed magnetic fields supports old age slow plate movement evidence.

9th: 2nd law of thermodynamics
Nye: Earth is not a closed system.We receive energy from the sun.
Ham: Energy or matter will never produce life.

10th: Could you be convinced the world is older than c10,000 years.
Ham: No
Nye: You want us all to take your claim based on nothing.  What can you predict?

11th: Is there room for God in science?
Nye: yes.
Ham: God is necessary for science.  observational v historic science. We assume laws of logic, nature the uniformity of nature. Where does that (as I've written it, "Where do they come from) come from?

12: Mr Ham, do you take everything in the Bible literally? Should we stone pig-touchers? Should men marry many wives?
Ham: Define literally.  If it's history, like Genesis, take it as literal.  The Bible shows marriage to multiple women causes trouble.
Nye: You pick and choose what to take literally.
---
stopped at 2:28

Posted by Surprises Aplenty at 21:09