Something for all those creationists to remember!

Hey, you stupid creationists, the 'Other Side' isn't dumb!

When will those frickin' idiots learn?

Alright, on the off chance you didn't follow the link, it goes to a general article describing 'the other' in any argument and so the lessons it offers are presumably just as applicable to evolutionists. 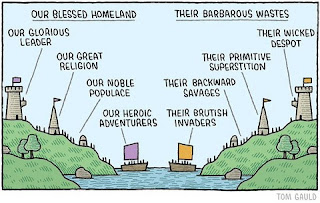 As any debate club veteran knows, if you can’t make your opponent’s point for them, you don’t truly grasp the issue. We can bemoan political gridlock and a divisive media all we want. But we won’t truly progress as individuals until we make an honest effort to understand those that are not like us. And you won’t convince anyone to feel the way you do if you don’t respect their position and opinions.

I think this paragraph makes a big jump from "understand" to "respect".  I try to understand various arguments for creationism and to respect the individual but I don't see that every argument automatically deserves respect. As a blogger who has deliberately focused on creationism's worst (but common) arguments, I see the ones displaying the least amount of research.

---
*Image is shrunk a little. More of Tom Gauld's work can be found here.

Email ThisBlogThis!Share to TwitterShare to FacebookShare to Pinterest
Labels: how to argue.