These types of arguments might be common in many fields but creationist/evolutionist discussion is where I spend my leisure time so that's where I know they are.

"Find a few pieces of evidence that fit your argument
and ignore all the others." 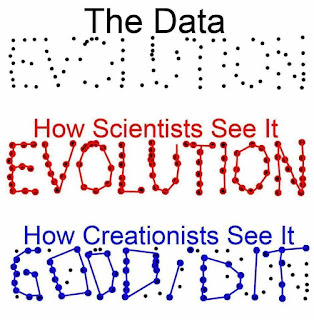 I've seen this image many times.  I saved the above from Twitter but when I searched for "the data how scientists see it how creationists see it", this was the first result. No idea who to properly attribute it to.
The best example of this type of argument for me is Carl Wielands's Glacier Girl article that shows how snow falls rapidly on the coast of Greenland so inland Greenland's ice sheets are young. In doing so, he ignores - and does not offer locations -the fact that the two locations are hundreds of kilometers apart and in different climatic zones.  He also ignores all the ways the ice core layer ages are confirmed - two layers=one year, volcanic ash deposits match historic eruptions, isotope ratios...

---
"We can't trust the experts!"
This argument definitely crosses borders.  I was reminded of it on Twitter by arguments over Brexit.

The link goes to: Britain's greatest enemy, the experts
In creationism circles, this argument often displays itself in strawmen arguments. but it also a common place to find lists of supposedly unanswerable questions.
This claim is made about the eye in various forms (the claim is given in various forms, the different forms of eyes is usually ignored). From Harun Yunha


For an eye to be able to see, the 40 or so basic components which make it up need to be present at the same time and work together perfectly. The lens is only one of these. If all the other components, such as the cornea, iris, pupil, retina, and eye muscles, are all present and functioning properly, but just the eyelid is missing, then the eye will shortly incur serious damage and cease to carry out its function. In the same way, if all the subsystems exist but tear production ceases, then the eye will dry up and go blind within a few hours.
The theory of evolution's claim of "reducibility" loses all meaning in the face of the complex structure of the eye. The reason is that, in order for the eye to function, all its parts need to be present at the same time. It is impossible, of course, for the mechanisms of natural selection and mutation to give rise to the eye's dozens of different subsystems when they can confer no advantage right up until the last stage.

An expert, even an interesed bystander, will see the problem. Fish, some amphibians and some reptiles don't have eyelids.  Clearly the specific example given is one of poor research and eyes are not irreducibly complex.

I spent ten minutes looking for this argument in the form of a list of fifteen or so questions for students to ask their biology teachers.  The question about eyes had, probably not 40 parts, but ten or so. It went something like, "5 Eyes need to be fully formed to work. a) When did the nerve to the eye form? b) When did the eyelids form? c) When did the cornea form?.... x)What did the animal with half formed eyes do?"  Couldn't find it.

I guess the "Why are there still apes?" attempt at a stumper question fits here, too.

---
We don't know, therefore Creationism
Or in this case, therefore Intelligent Design:


...none of them have the slightest clue as to how it actually happened, and (B) The obvious and most significant conclusion that can be drawn from all their splendid work in the lab is that the only reasonable explanation for the emergence of life is Intelligent Design!


---
Are there arguments that fall outside these categories?

Posted by Surprises Aplenty at 08:44