Biblical defense of a flat (and square) Earth

In 1893, Professor Ferguson (professor of what, I don't know) drew a map representing what he thought the Bible required the Earth to look like. 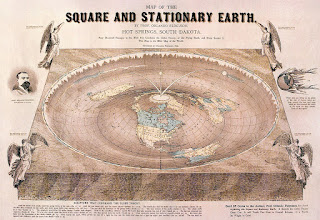 The image is from Wikimedia. It comes with this caption:

MAP OF THE
SQUARE AND STATIONARY EARTH.
BY PROF. ORLANDO FERGUSON,
HOT SPRINGS, SOUTH DAKOTA.
Four Hundred Passages in the Bible that Condemns the Globe Theory, or the Flying Earth, and None Sustain It.
This Map is the Bible Map of the World.

A fragment of a footnote:


SCRIPTURE THAT CONDEMNS THE GLOBE THEORY

The Sensuous Curmudgeon has also documented verses that defend the notion of a flat Earth -although in the Curmudgeon's case, it is for purposes of mockery. A fragment:


1Samuel 2:8
for the pillars of the earth are the LORD’s, and he hath set the world upon them.
1 Samuel 2:10
The adversaries of the LORD shall be broken to pieces; out of heaven shall he thunder upon them: the LORD shall judge the ends of the earth;
Job 9:6
Which shaketh the earth out of her place, and the pillars thereof tremble. [A reference to the usually unmovable earth, but it must be flat to sit on pillars.]
Job 37:3
He directeth it under the whole heaven, and his lightning unto the ends of the earth.
Job 38:4
Where wast thou when I laid the foundations of the earth?

Strange that not many Creationists defend this claim any more.
Posted by Surprises Aplenty at 15:06