definition of a theory

Here is a common creationist definition, although a little more honest than some:

After all, evolution is a theory, and in the dictionary I have, it states that a theory, among other things, is a hypothesis, a guess, a conjecture, a speculative opinion — hardly absolute fact.

The unusual honesty is in the phrase, "among other things".  Let's look at two online dictionaries: 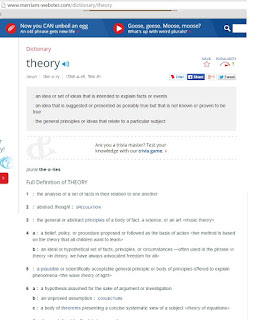 The scientific definition is not so clear at Merriam Webster and it could be the first or fifth one in the list. 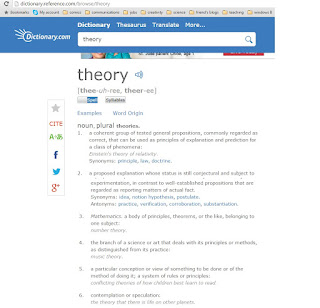 Here, the scientific definition is the first one.

Even Google's own definition service puts the  scientific meaning first: 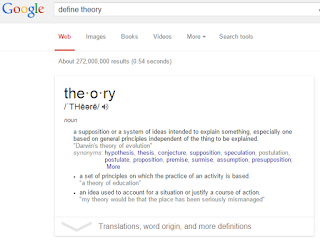 The word 'theory' can be a synonym for 'guess' or 'conjecture' or 'opinion' but it sure seems dishonest when the relevant definition is there and deliberately skipped over.

Added Sept 24: a nice graphic from York Daily Record.  I hamfistedly added an extra line and some text to it. 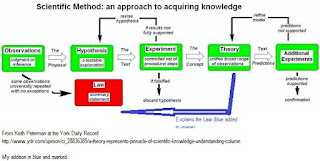 ---
Added later on Sept 24: At Science Alert, a video explaining the difference between hypothesis, theory, fact and law.
---
Added later, On Aug 23, 2016, Piers Sellers on climate change and Theory:


Fundamentally, a theory in science is not just a whim or an opinion; it is a logical construct of how we think something works, generally agreed upon by scientists and always in agreement with the available observations. A good example is Isaac Newton’s theory of gravitation, which says that every physical object in the universe exerts a gravity force field around itself, with the strength of that field depending on its mass. The theory—one simple equation—does a superb job of explaining our observations of how planets orbit around the sun, and was more than good enough to make the calculations we needed to send spacecraft to the moon and elsewhere. Einstein improved on Newton’s theory when it comes to large-scale astronomical phenomena, but, for everyday engineering use, Newton’s physics works perfectly well, even though it is more than three hundred years old.

via pharyngula.
Posted by Surprises Aplenty at 07:53

Email ThisBlogThis!Share to TwitterShare to FacebookShare to Pinterest
Labels: dictionary, quote mine, Theory