Happy Darwin Day! And Creationist agrees that the evidence points towards evolution

It's the 13th here in Korea, but still the 12th in many countries, so I think I'm in the clear and don't have to add an embarrassed 'belated' to the title. 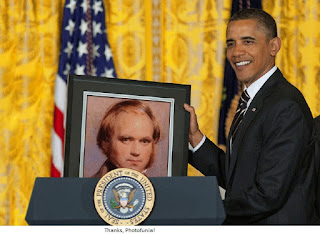 Albert Mohler, president of Southern Baptist Theological Seminary in Louisville, Ky offered remarks about the discovery of gravity waves - I really should learn what their significance is.


Mohler said Christians believe the universe is telling a different story: as the psalmist puts it, “The heavens declare the glory of God.”

Mohler said part of being created in God’s image is an innate desire to understand and know the cosmos around us. At the same time, he warned, much of what is presented as scientific proof is at odds with the Bible, including the historical account of creation recorded in the opening chapters of the book of Genesis.

“Now to be candid, I don’t believe that the world is 1.3 billion years old, certainly not billions of years old,” Mohler said. “I don’t even believe that is actually millions of years old. But one of the interesting things we need to note here is that the scientists who believe that believe it because they are looking at certain patterns that, to their observation, tell them that. And what we need to note is this, if we ourselves were operating from a simply materialistic and naturalistic worldview, we would probably come to the very same conclusions.”

Does this say that Mohler agrees the evidence, as viewed objectively, supports evolution?


“And we also understand that we are fallen, fragile, fallible thinkers and so as we look at this, if we’re operating from a basically secular worldview, if we believe the universe is going to have to tell us the story all on its own, then there’s no way we’re going to come up with the right story.”

It think it does.
Via the Sensuous Curmudgeon.
---
*Thanks, photofunia.
Posted by Surprises Aplenty at 09:43