Ruben Bolling does it again

I follow 'Take That Darwin' on Twitter and s/he is able to find variations on the "If humans came from apes..." argument everyday.  Today's Tom the Dancing Bug comic describes what creationists seem to think should happen when they use this argument. To encourage people to see the original, I have shrunk the image and cropped it significantly. 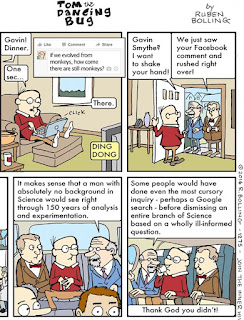 I also moved the 'Tom the Dancing Bug' title to the right so it would be in the cropped image.  Ah, if anyone reads this, have I gone too far in my 'I'm not stealing this image' routine?  Or not far enough?
Posted by Surprises Aplenty at 10:12

Email ThisBlogThis!Share to TwitterShare to FacebookShare to Pinterest
Labels: misconceptions, why are there still apes