Among other things, the Sensuous Curmudgeon tracks "self-published geniuses".  #42 was Wayne Rossiter and his book Mind over Matter. Wayne and Brian Rossiter have a Facebook page for their book and they were sufficiently open to criticism to post a link to the Sensuous Curmudgeon. On their Facebook page I posted this review of a sample of their book (text also pasted below if the picture is unclear): 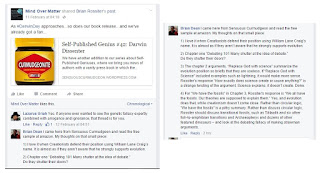 I came here from Sensuous Curmudgeon and read the free sample at amazon. My thoughts on that small piece:
1) I love it when Creationists defend their position using William Lane Craig’s name. It is almost as if they aren’t aware that he strongly supports evolution.
2) Chapter one “Debating 101 Many shutter at the idea of debate.”
Do they shutter their doors?
3) The chapter 2 arguments, “Replace God with science” summarize the evolution position so briefly that they are useless. If “Replace God with Science” included examples such as lightning, it would make more sense. Rossiter’s response “How exactly does science create or cause anything?” is a strange twisting of the argument. Science explains, it doesn’t create. Done.
4) For “We have the fossils” in Chapter 3, Rossiter's response is “We all have the fossils. Our theories are supposed to explain them.” Yes, and evolution does that, while creationism doesn’t come close. Rather than circular logic, "We have the fossils" is a pithy summary. Rather than discuss circular logic, Rossiter should discuss transitional fossils, such as Tiktaalik and six other fish-to-amphibian transitions and Archaeopteryx and dozens of other featured dinosaurs – and look at the debating fallacy of making strawman arguments.

Email ThisBlogThis!Share to TwitterShare to FacebookShare to Pinterest
Labels: book